My husband, Daniel, is the type to always be looking for something to keep life interesting and find things to do off the beaten path.  One aspect he has been a blessing for me in this area is that of food. He likes coming up with new ways to prepare food or simplify and shorten the time I need to spend in the kitchen. Whether it's baking a big batch of cookies and freezing some for his lunch or making a mega amount of sandwiches, wrapping them in tinfoil ready for him to pop them in the oven at work, or making a big batch of creamsticks with the children, having enough to freeze and share, I always enjoy hearing his latest brainstorms.

CAPTIONS:  The Yoder's make homemade chili soup in a big cast-iron kettle over and open fire.  The chili is then canned for consumption later and also enjoyed on the spot. 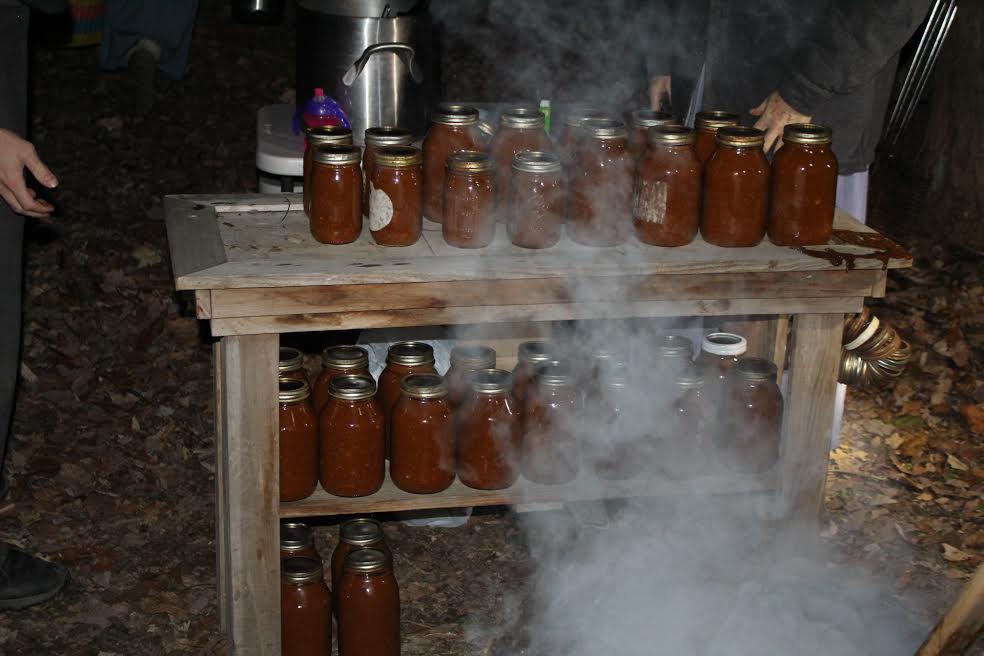 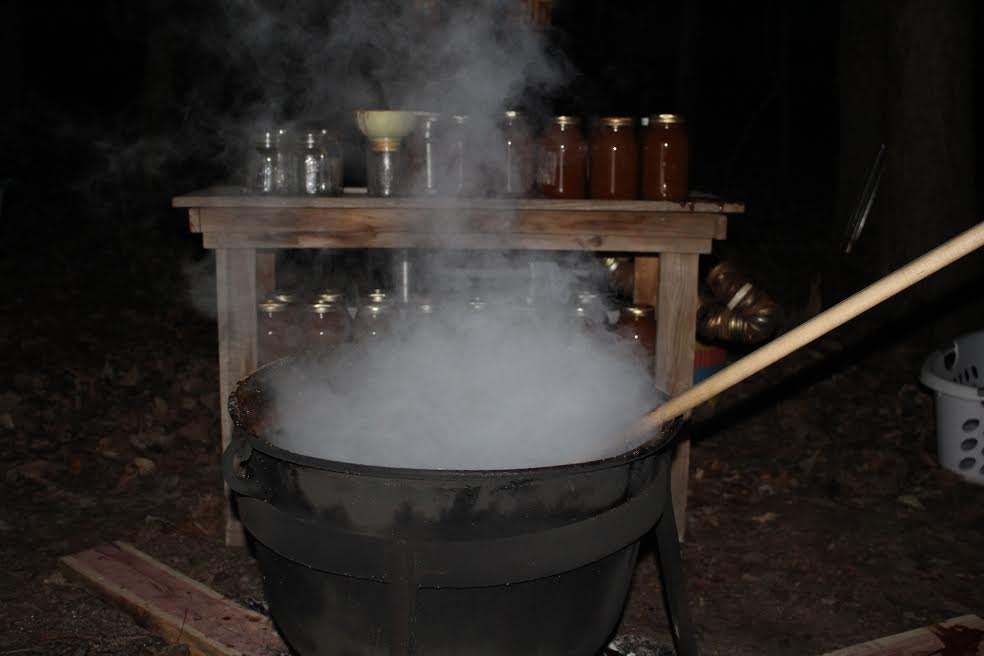 I was especially impressed a while ago when he suggested making a huge batch of chili soup. Our friend, Owen has a large 40 quart cast iron kettle,which he was delighted to lend to us. It really sounded like a good idea, we would have an ample supply for the winter months ahead.

We had plenty venison in the freezer that would work well for the project at hand and thanks to Mom, who had more tomatoes in her garden this summer, than she could use, who kindly shared with us. I had cut them up and put them in freezer for later use. Now it only seemed like the practical thing to do to make a large batch of chili soup - our main problem was the cool weather that kept us from perusing the project. We kept watching the weather, in hopes of pleasant weather so we could take the children out with us. This week we were delighted to have lots sunshine as the weather warmed up once more. We snatched the opportunity to build a bon fire and tackle the soup.

Owen brought his big kettle, which he had purchased at his grandparent's auction a couple years ago. It's the old fashioned cast iron type that I've always admired, but never owned.   My parents and sisters joined us in the woods behind our house where the steam rolled in great billows as the tomato juice boiled rapidly. The weather was  pleasant, just cool enough to enjoy the heat of the crackling fire. Daniel even wrapped baby Jesse in a blanket and took him out to join us for a while where I sat beside the fire, holding him.

Making large quantities of food was always something I enjoyed, but having the opportunity to do it over a fire added an entire new dimension in my way of thinking.

First we browned the venison, then added the chopped onions, we're onion lovers so I put in plenty of those  before adding a mixture of seasonings  and flour. After browning this a bit we added the tomato juice, maple syrup, and the pinto beans that I had cooked on the stove. Next came the fun part-

tasting and adding some of this and that to give it just the right taste and consistency. We wanted it have a good chili flavor without it being too strong for the children. And yes, we were quite pleased with the turn-out, even the little ones liked it! It's hard to imagine that I used to have a fairly strong dislike for chili soup. Thankfully some things change for the better as a person adds years to their age!

By 7:00 we had 32 quarts filled, ready to be sealed. Of course we also saved some for our supper. I served it our favorite way - with cheese and corn chips. Our friends in Alaska introduced us to this idea when we visited them a number of years ago.

Here is a recipe similar to what we used, only in a smaller quantity.

Fry and chop hamburger in a 6 quart kettle. Add onions and fry a bit longer.

Sprinkle flour and seasonings over this and stir with a spoon to mix. Add tomato juice and turn on high, stirring frequently until it thickens and boils. Reduce heat, adding the rest of the ingredients. Simmer for 1 hour to allow the flavors to develop.  If you like a sweeter chili, add  1 /2 cup brown sugar. If you like a fiery soup, add red pepper. This makes around 5 quarts of a nice, thick soup.