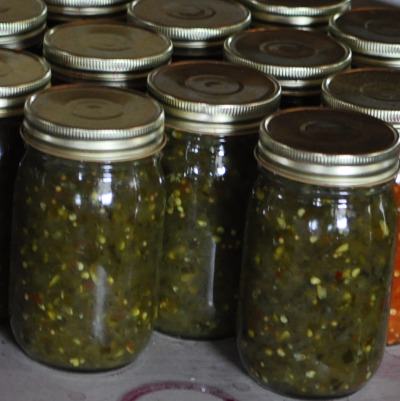 WILMA HERSHBERGER'S HOMEMADE CUCUMBER RELISH:  This is a wonderful recipe that is made in an Amish canning kitchen in Knox County, Ohio. This is some good stuff! Click here for the recipe.

SUMMER FROLIC CASSEROLE: Click here for this hearty, charming recipe to whip up for a crowd.

SUMMER BLACKBERRY CRISP:  Ah, I remember when a Blackberry was a type of phone I had, now the word has gone back to meaning what it should: a succulent, summer treat.  Take a look at this photo of some delicious blackberries I bought at a roadside stand run by some Swartzentruber Amish in Sinking Spring, Ohio.

HOMEMADE ROOT BEER:  I once tried making this and it was a disaster, but it wasn't the recipe,it was me, because other people have tried the recipe with success.  The picture you'll see in the clickover is of some homemade root beer I bought from an Amish stand in Lancaster County, PA. Click here for the recipe for homemade root beer.

AMISH DATE PUDDING:  This recipe may come as a surprise but,yes, it is a popular, popular concoction among the Amish. And as a summer dessert, this is amazingly, amazingly refreshing. So throw out any preconceived notion you may have about dates and try this recipe, you will not be disappointed. But try it now, it's best on a hot summer day!