My grandma can be a tough food critic.  She spent decades working as  cook in a hospital kitchen (back when those places did most of their cooking from scratch and not prepared from trucked in food) during which time she honed her tastes. Add to that history her Italian food heritage and not much gets by Grandma Mary (Mary is a pretty name, obviously Biblical…simple, classic, but it’s not a name you hear a lot of children being named anymore, do you?).  Add a bit too much salt or not enough and she’ll tell you.  Your potatoes aren’t cooked enough? That won’t get by Grandma.  She’s known in our family for her  spaghetti sauce and her potato salad.  The potato salad isn’t any sort of fancy recipe, it’s just got a great flavor balanced between crunchy and creamy.  It’s not Easter without Grandma’s potato salad, she used to make it several times a year, but Easter has become the time when it is served, so we’ll be waiting awhile for the next round.  So  I wondered how my family’s potato salad queen would react to Rosanna’s “Wow” Potato Salad.  Well, simply put: Wow.  To have grandma heap praise on someone else’s potato salad is saying something.  I took some of the potato salad we made with Rosanna’s recipe over to my Grandma’s the other night and she instantly loved it.   I think Grandma liked the shredded consistency of the potatoes that give it a sort of creamy taste. She remarked that the potato salad is good for older people with maybe not the best teeth. 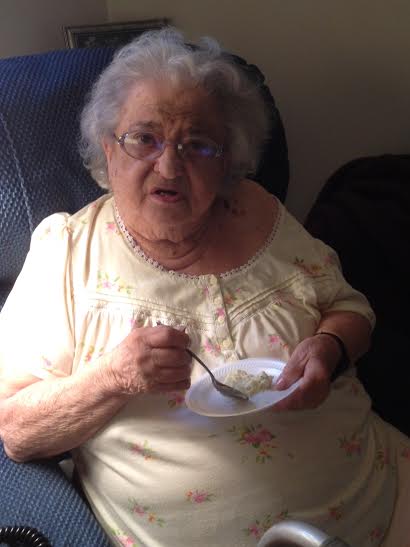 I pressed grandma about her potato salad and put together a recipe.  Of course grandma doesn’t follow a recipe card, it’s in her head.  So I had to sort of tease it out of her.  I usually don’t mention brand names in recipes but Grandma is insistent on her brands.    No other mustard would work besides French’s, no mayo besides Hellman’s and so on. So I have included some of the brands she insists on in the recipe.  Corn oil, it has to be Mazola.  We should get a paid endorsement gig here!:)  The family jokes about how many spoons she goes through when making the salad as she tastes it to make sure the formulation is just right. And it always is (but I do have to say that Rosanna’s recipe was amazing too…SIGH, glad I didn’t have to do a blind taste test!)