Most Amish and conservative Mennonites won’t be watching the Kansas City Chiefs and the Tampa Bay Buccaneers face off on Sunday.  Sure, as I always say, there are exceptions to everything. Somewhere, there’s probably some Amish fans of the Super Bowl who will be following it somehow while enjoying this Tangy Mustard Super Bowl Sauce. But the vast majority will not.  Baseball, I find, tends to enjoy more of a following among Amish than football. Football is a more rough game and, well, I wouldn’t call it violent, but it has aggressive overtones that aren’t really a part of Amish cultural custom.

If you drive through Amish country on a warm spring day you’ll see plenty of impromptu games of baseball out in fields, but I’ve never seen a game of football. Other sports popular with the Amish include ice hockey. That’s during the winter, obviously. Occasionally, you’ll see a basketball hoop in an Amish driveway. But basketball doesn’t enjoy the following that baseball does.

Even though football doesn’t enjoy a lot of cultural currency among the Amish, that doesn’t mean you can’t raid their culinary traditions for some great snacks for Sunday.

I love authentic home-Aconcocted Amish and Mennonite recipes, so this tangy mustard sauce caught my eye. It would be perfect for dipping chicken wings and tenders into
SIGH, though, I should’ve known better… The recipe calls for “¼ a cup dry mustard." That’s a lot. Most recipes call for a teaspoon, half a teaspoon, something like that.  To me, that just shows the power of the print word and my desire to give the cook the benefit of the doubt. I knew that seemed like way too much, but I thought “well, maybe there’s a reason, maybe this is just some special sauce that calls for that much. "

Well, the resulting sauce tasted pretty bitter. I’m not sure if that’s the right word for it, but it wasn’t good. So I looked long and hard at the recipe and compared it to other recipes online and I assume that she meant a fourth a tablespoon (¼ teaspoon seemed to little).  The rest of the sauce's ingredients looked really interesting, so I went to work a second time and the sauce turned out really great. Tangy just like it says. So as long as you don’t have a fourth a cup dry mustard, you add a fourth a tablespoon instead, you’ll be in good shape!

There are some amazing party recipes here, my favorite being Saloma Byler's Texas Chili, give them all a try! 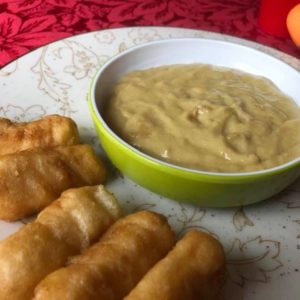