The Wheat Ridge Amish settlement some 60 miles east of Cincinnati holds deep sentimental value for me.  So whenever I visit these rock-ribbed ridges, deep valleys, and the bucolic Amish settlement that has called the area home since the early 1970s, part of me perks up.  Adams County is one of the settings for my Rebecca series and it's a special, peaceful place for me. I 've spent countless hours over the years just exploring the warren of roads which wind through the hills.   The one place I have not had a chance to check out that I want to someday is Buzzard's Roost.

Yesterday I wrote about visiting the community's benefit supper and auction held last Friday.  My mother accompanied me and it was a nice visit for both of us.

This is an event I definitely recommend and I list it in the Williams Guide to Amish Country.   Several hundred people attended the auction and supper and about half of them were Amish.  Mom sat and watched the auctioneers call out prices and bids, while I talked to people, gathered information, and took photographs.   I did get a recipe for the chicken marinade they use on the popular grilled chicken...I thought I was going to share it today, but, alas, I am going to save it for the "Memorial Day Picnic Recipe" week, the week of May 19th.

Homemade vanilla ice cream was popular which an Amish boy wearing a crisply pressed black shirt and white suspenders dispensed.  Mom wanted "pie a la mode" so she just had him plop a scoop directly onto her pie, while I ate it from the dish.  I kept trying to find the Amish man who was in charge of the ice cream.
"I haven't had a free minute to even look around," the boy said when I asked a second time if he had seen the "ice cream man."  Taking a hint, I abandoned the idea of finding him.

I did speak with one of the community's ministers, a soft-spoken, friendly man dressed in all black.  We had a short but nice conversation.  He agreed with my assessment that the Wheat Ridge settlement is very "traditional/middle-of-the-road", not an ultra-conservative Swartzentruber community, but not a progressive Holmes County-type either.  Here are some more scenes from an event well worth attending.  Mark your calendar for the first Friday in May 2015!

Above, boys and girls play a spirited game of volleyball outside the auction house. Below, dozens of buggies are parked in a lot near the auction house, and an Amish man (a very tall one) watches the auction action.  One amusing scene that Mom and I ran into is also posted below.  We saw a sign for Hillside Bookstore, an Amish-owned bookstore and bird feed/supply store.  Kind of an odd combination, but I'm a sucker for a bookstore.  A big banner by the road proclaimed "OPEN."  It was late, but I figured the owner must have been trying to coattail off some of the auction traffic.  So we excitedly pulled into the driveway, only to see a store that looked abandoned, with one sign saying "Closed" and the other saying "OPEN."  Nothing like covering your bases!:) 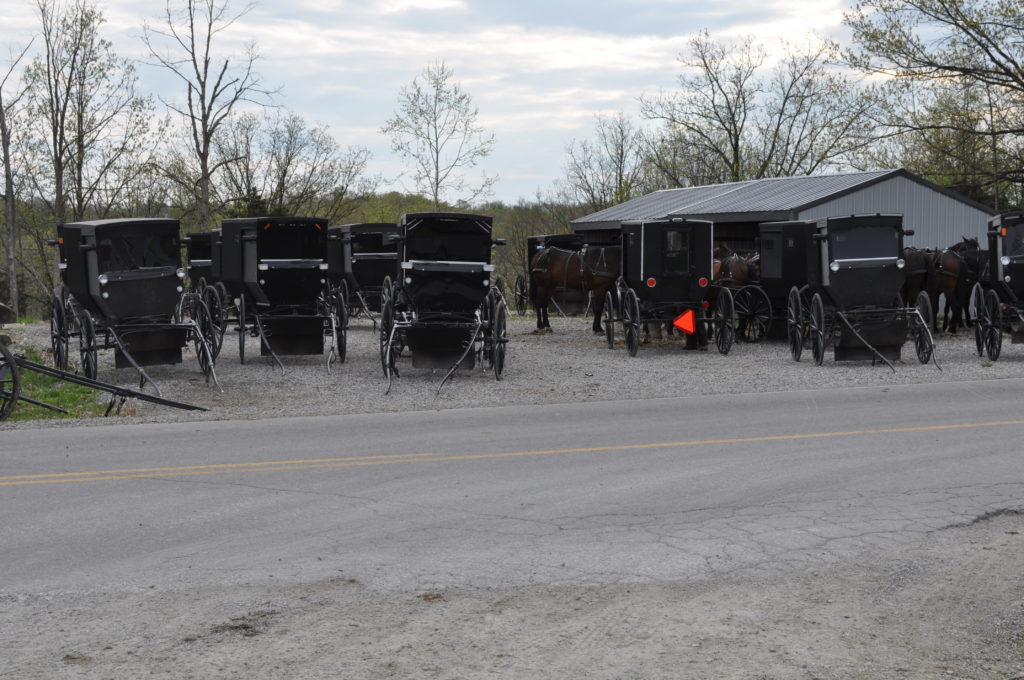