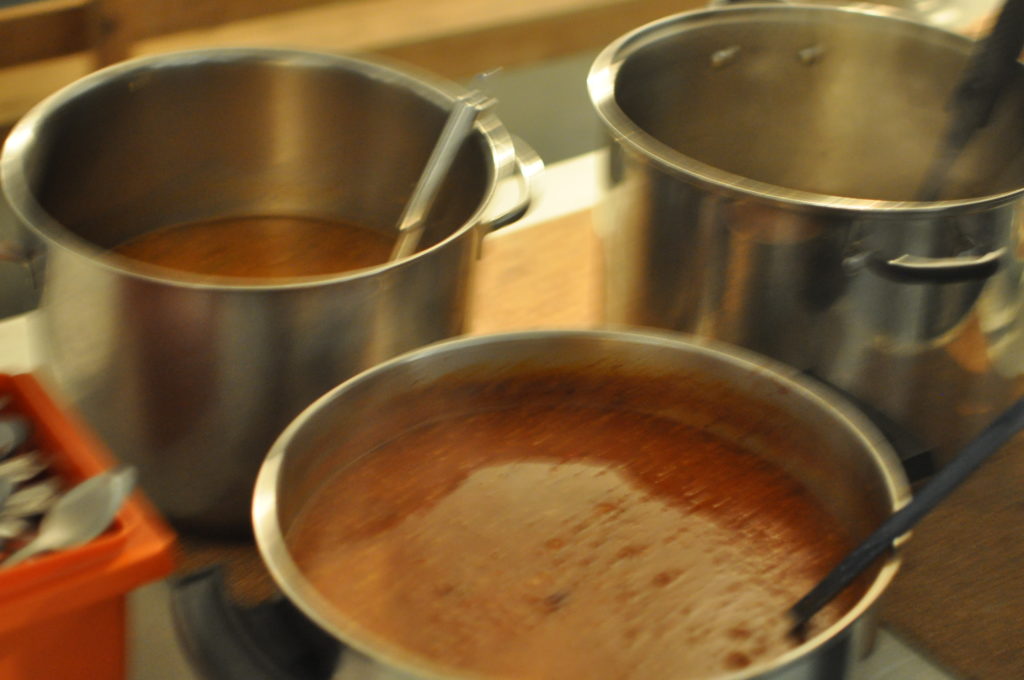 I was at a potluck gathering of Old Order German Baptist Brethren a couple of weeks ago (more about the gathering tomorrow) and I spied a lot of chili steaming on one of the tables. I sampled it and found it to be quite tasty, so I tracked down the cook who made it.  She was a kind, quiet polite woman who was nice enough to share her recipe with us.  I asked her what it was called and she was like "This?  This stupidly easy pizza sauce chili?"   What happened was she needed to make a pot of chili for the gathering but realized she was out of tomato sauce, so she was trying to think of a way to improvise.  Her solution: pizza sauce and salsa.

The cook used her own homemade pizza sauce and her own salsa.  So when using 4 "cans" of pizza sauce, I would get as close to a quart as you can in the amounts.  With the beans, she said just to experiment, but she used some navy beans, northern beans, chili beans, so you can adjust the bean amounts as you prefer.  For beans she would not have used home-canned, so when it says "cans" in the rest, just gets your standard store-bought cans and drain.

The meats are another area where you can and should experiment.  This cook only had deer burger and sausage on hand, but you can use blends of other meats including hamburger if you don't have venison on hand.

While you can experiment with this recipe and tailor it to your taste, the cook did tell me that the cumin was a key ingredient. So don't mess with the cumin and you'll have an awesome chili!

I apologize for the poor photo, I was shooting fast and the light was low.  But the pot out front has the chili. Yum!