The children ran for the house the moment we got there. Uncle Vernon’s house was never boring. With twin boys in their 20s, our little boys never cease to be amazed over all their fishing and hunting gear and all big boys can do. Besides that, they have operated a fish farm since I was a little girl.

They welcomed us with their usual warm welcome. Miriam again soon busied herself in the kitchen and told me there was nothing I needed to help with. Their screened-in porch along the back side of the house beckoned us.

Vernon fired up the deep fryer in the yard next to the back porch.

The boys took their little bows and arrows and went to the backyard to practice shooting targets with the twins. Happy shouts greeted my ears as we sat on the porch steps watching Vernon skillfully fry hush puppies, fries, and fish. Julia, Hosanna, Joshua, and I took everything in as Vernon fried hush puppies and fries and told stories in the meanwhile. Vernon was always an avid storyteller, and it never takes little children long to catch on to that. Flipping a strainer full of fries into the pan, a few spilled to the side.

“Oh, those must be appetizers!” I commented, reaching for one.

I cooled a few down for the little ones and bit into one myself. “Why those are the best I ever had.” I declared. “Crisp on the outside and perfectly tender in the middle. How hot do you have your oil for fries?”

As soon as the fish were in the fryer, the boys were summoned to come to wash up and sit down to eat so the fish could be eaten immediately after they were done.

Soon everyone was ready. I smiled as I looked at the six children sitting around their deck table. These are good years... children still grow up, and God still gives joy despite the reality we miss Daddy so on an evening like this.

The fish was a hit by all. Miriam’s potato salad complimented her deep-fried foods perfectly and tasted just like Grandma’s used to. Fruit smoothies and energy balls finished the meal.

As the last plates were emptied, the children were bouncing with excitement. They planned to help feed the fish and see if they could catch a catfish with Vernon’s fake duck.

Soon the dishes were done, and we headed for the pond beyond their backyard. The children were impressed as they went onto the dock, helped throw catfish food in, and watched as the hungry catfish gobbled it up. Precious memories of feeding fish with Daddy came flooding back. They all had a vital part in Daddy’s life, helping him feed fish.

Now came the hilarious part. Vernon got out the duck decoy with an 18-inch string attached to the bottom of it. At the end of the string was a hook which he baited. Giving the duck a toss, it landed on the water, gracefully floating on top.

Another longer string had also been fastened to the duck, with the other end tied to the boat dock to keep the duck from floating away. “Now we’ll wait quietly and see if a cat gets the bait,” Vernon explained.

“Once a catfish gets hold of it, you’ll know- there it goes!”

There were giggles and shouts of delight as the duck bobbed up and down, spun a circle, then dove into the water as the catfish tried to get loose. Vernon and the twins carefully pulled it toward the dock, then scooped it with a net and placed it in a large fish cage.

You know how children are. “Could we do it again?”

The whole scenario was repeated a few times, bringing more shouts of delight. Even the grown-ups had a fuss when the last one was pulled in, weighing close to 11 pounds.

Soon it was 7:30 and time to head home with the children going to school the following day. Nonetheless, we were all left with warm memories.

Okay, now Miriam is a cook at heart; you’ll never have to wonder if her food will be tasty or not. This week I’ll share her Amish potato salad recipe with you. This Amish Potato Salad recipe is the one my grandma used for years before passing. No doubt she’s made, she made hundreds of gallons of Amish Potato Salad, whether it was to serve at Amish funerals, for her guests, or for Uncle Paul’s country store. 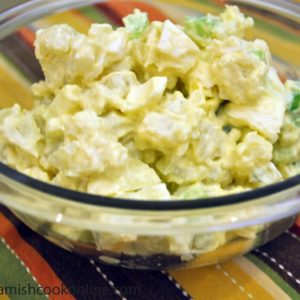