Austin, our early riser and six-year-old son, and I were sharing a few quiet moments and discussing various aspects of the day ahead. That's when I told him: "You know, you really should go get dressed and check on Daisy, just in case she's had her baby goats during the night."

Scarcely had he scampered for the bathroom when I heard faint bleats, which unmistakably were that of newborn kids. Sprinting out onto the porch, I was just in time to see Daniel heading in from the pasture with newborn goats in his arms. It was starting to rain as Daniel swiftly strode for the barn. Stepping inside, I told Austin the news. In record time, he was dressed, and the two of us dashed out the door.

We didn't mind the rain splatters on our back as we both ran for the barn. (Joy shared is joy doubled. Right?) As Daniel set the babies down, it was apparent that one had not been born long, as it struggled to stand on its wobbly legs.

When Daniel announced that they were both nannies, we cheered with delight. Since Daniel and the children had the names had already been picked out for some time, there was no question. "Rosy and Posy," Daniel announced. Now it was my turn to smile. Turning time back 20 years, we had a nanny goat on this very farm. She had twins named Rosy and Posy, which we adored. Now here I was watching the delight on my child's face.

Returning to the house, we awoke Julia. Austin was beyond thrilled to share the news with her and show them off. Soon the other children awoke one by one. It was interesting to hear each of their responses. Jesse's response was as confident as ever, "I'm going to hold them!"  We couldn't interrupt our breakfast and devotions every time another little child awoke. So we just told them that we'll all be heading out together as soon as they've done their part in clearing the table. (Elijah always clears the plates and bowls, Jesse the silverware, and Hosanna the glasses.) Needless to say, clearing the table happened swifter than usual.

By the time we were ready to head out, the rain had slowed. As we entered the barn, there were more ahs and ohs as the children exclaimed over the babies. And yes, soon Jesse had gathered one in his arms and carried it around proudly showing it to the rest of us. Daisy proudly walked around, impressed to show off her babies. We all agreed that the white one, which looked like a sheep, would be Posy, and the other with black splashes across its body would be Rosy.

All too soon, it was time to head back and continue with morning chores around the house. We promised the children they could spend lots of time in the future with the goats and help bottle feed them.

These last days the children have been training them to drink from a bottle. They are getting the hang of it, though it's also taken some effort. Julia and Hosanna, especially, are like little mother hens, hovering over them.

And oh, a year ago, there is no way you could have convinced me how eager I'd be for fresh goat's milk again! I chuckle as I think over how I've had to change my mind. Being out of goat's milk for a few months showed me how much I had come to depend on it and even like it. After the seventh milking, when the colostrum was out of the milk, and we could keep it, guess what the first thing I did was? It was a priority to make homemade ice cream with pecan pie.

With it being the middle of summer, I'm going to have to pass the recipe for Quick and Shlick Homemade Ice cream recipe on to you. It was the primary recipe mom used at home. And by the way, regular milk may be used instead, and if you've had a bad experience with strong tasting goat milk, don't stop till you find a good goat getting good care, resulting in no bad taste at all! Okay, okay, that's enough said. By now, you're getting the drift that I do get along well with our four-legged family pet!

I was fortunate enough to taste this very recipe while visiting Gloria once on a hot, hot, oppressively humid August afternoon and it was refreshing! It's a bit more mushy than a traditional grocery store ice cream, but that isn't a bad thing. You just need to eat it right out of the freezer because it will melt faster than a store-bought ice cream. This recipe does call for Clear Jel. Clear Jel is a favorite thickener among Amish cooks. It works similar to cornstarch and, I suppose, in a pinch you could use cornstarch instead-but if you can get your hands on the real thing, you might want to do so. Clear Jel is almost impossible to find in grocery stores, but you can find it in Amish bulk food stores or online on Amazon, but geez almost everyone, for some reason, is out of it...I did find one place still selling some, here is an affiliate link you can order from.  Also you can make a plain vanilla ice cream but just omitting the strawberries from this, or switch it up and replace with peaches or blueberries!

Blueberry Cheesecake Ice Cream: Cool off with this!

Old Recipe For Maple Vanilla Ice Cream - This is a delicious one also! 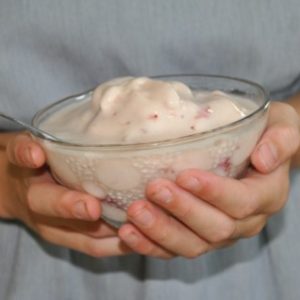 Tried this recipe?Let us know how it was!
« Farmhouse Amish Beef Stew
Mouth-Watering Barbecue Steak Strips »