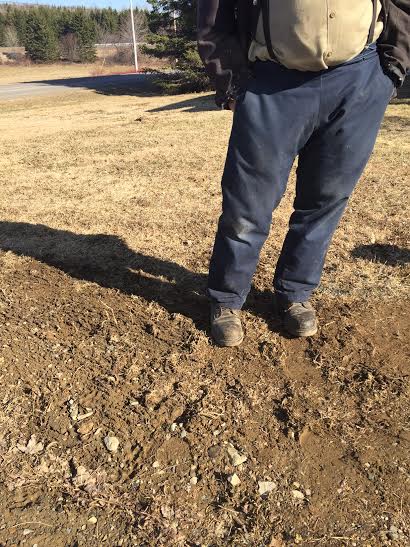 When I was in Smyrna last week I was lucky enough to catch my friend, Chris Speicher, at home.  He's a very interesting man with lots of interest in holistic health and healing.  Recently he and his wife started selling baked goods at the Houlton Farmers Market in Houlton, Maine each Saturday during the summer and fall. So if you are lucky enough to be near there, I have one word: VISIT!!!  You'll be very lucky to snag one of their pies or homemade loaves of bread. Here is information about days and hours.

"You know, that gluten-free is really popular," Speicher commented during our conversation.  He said that they make a homemade oatmeal bread that is not gluten-free, but has earned raved reviews from those steering away from gluten.  SIGH, I'm a glutton for gluten.  Bread does me in...Speicher isn't sure why his oatmeal bread sells so well, but it does (maybe people buy and think it is gluten-free, he doesn't advertise it as such and his recipe does have "a little white flour" in it).

Who knows?  He also gave me a box of an interesting sounding herbal supplement which he said has something curative qualities for digestive issues. I'm still researching that and I'll report back.

Meanwhile, I have an Amish oatmeal bread recipe in my archives that I thought I'd share.

The Amish woman in Indiana says of the bread:

"While often sliced and served for supper, fresh bread can be found on the table at any meal of the day. I used to make a lot more bread when all of our children were still living at home – usually about nine loaves a week. I would bake the bread before they came so when they got in the door it was good and warm.”

Here is her recipe.  My guess is that it has more white flour than Chris's, this oatmeal bread version is from at least 30 years ago before the gluten-free trends swept in.