We talk on this site a lot about the Amish, Mennonites, and Hutterites but there are other “Plain” groups out there.  Every group on this list (except for the last one) has some sort of historical tie to the Amish but over the years theological and cultural schisms have formed new groups.  I find these peripheral groups very interesting as they are generally much smaller and lack the support structure of the larger Anabaptist movement.  So, here is my list:

LOBELVILLE, TENNESSEE:    This is sort of an evangelical Amish-Mennonite hybrid.  There are a handful of people in the church designated as drivers for the community and there is a community van, in this way the church is less reliant on outsiders than the Amish.  Men have mustaches, something you rarely find in Amish communities.  “Lobelville Amish” can be found in Pearisburg, Virginia,’s Amish community where they’ve caused a major church schism and there are a handful of families in Holmes County, Ohio that now affiliate themselves with Lobelville. Here is an interesting Wikipedia article that outlines the deep and complicated lineage of this group.  One of these days I am going to go visit Lobelville and do a nice indepth piece for this website.  That's kind of in my "within 2 years" goal.

CANEYVILLE, KENTUCKY:  This is the last remaining “Christian Community” as envisioned by Amish minister Elmo Stoll.   This is an attempt to sort of blend the communal teachings of the Hutterites with the strict Plainess of the Amish.   At one point there were five Christian communities scattered across the USA, but most disbanded after Stoll’s death in 1998.  The Caneyville settlement still exists.  The “Caneyville Amish” still use horse and buggies but they don’t speak German.   This makes them more accessible to outsiders who might be interested in joining an Amish church but find the language barrier too tough to clear.  Here is an interesting, more indepth, piece about Caneyville.  I'd like to visit Caneyville, maybe on the same trip as Lobelville.  I'd love to see what's left of Elmo Stoll's original vision.

BERGHOLZ, OHIO:   Okay,  many of you have heard of this place and not for good reasons.  This community is a breakaway sect of the Amish that became infamous for the “beard cutting attacks” on other Amish.   I guess my desire to visit her is more to find out what went wrong.  It appears that you had a band of devout Amish who came under the influence of a charismatic bishop and everything just went off the rails....I'd like to visit, but it'd probably be not the friendliest place.. 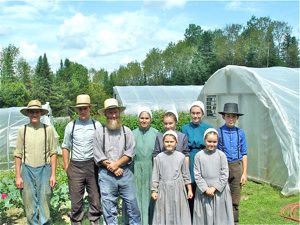 A Plain family in Corinna, Maine.

CORINNA, MAINE:   Long before the Amish arrived in Maine in the late 90s to start settlements in Smyrna, Unity and elsewhere, there was the “Amish Christian Fellowship” in Corinna.  I’ve never visited there and doubt I’ll have the chance any time soon.  I once spoke with the minister of the church who described it as a sort of “hodgepodge” Plain community. There are ex-Amish there, people who didn’t fit in maybe in other Amish communities and a handful of converts. They are not a horse and buggy community There isn’t much to find online about Corinna, but this is an interesting article that gives some insight into the community.    If anyone knows more about Corinna, let us know!

FLORA, INDIANA:  This is an Old Order German Baptist settlement that still uses horse and buggies, one of only a handful that still does this. I've been to a similar community near Bradford, Ohio, so I'd love to visit Flora and compare the two.