Round steak is something that was part of my growing up. It was my grandmother's "go to" meat, along with hamburger and bologna. It was, and still is, a relatively cheap cut of meat that is very versatile. And that is what makes this Amish Oven-Baked Top Round Steak so appealing!

My grandmother would cook it and it as a stand-alone meal, but what she really liked to do was have cooked round steak mixed with her spaghetti sauce and meatballs. In fact, that was one the "secrets" to good spaghetti and meatballs, adding some round-steak to the sauce. But sometimes meals like this Amish Oven-Baked Top Round Steak  were favorites also.

Grandma would sometimes cut up a pepper, or some teaspoons of oregano,rosemary, thyme, or add some garlic for flavor. But usually she just prepared it very no-frills.  The round steak is a more accessible cut of meat, coming from the leg of the cow, as opposed to flank steak, for instance, which is stomach muscle of the cow.  And we won't get into the ever-popular skirt steak

What is a good substitute for round steak if you don't have any?

Cube steak is a very good substitution, very similar cuts of meat. And if all else fails, try a rump roast!

What is a good Amish gravy recipe to use with round steak?

What type of oven do most Amish cooks use?

This varies greatly between Amish settlements depending on local customs and traditions. Wood-stoves are still very common, but they tend to heat unevenly. Kerosene is another widely used cooking stove among the Amish. Still, others would cook a top round steak over an open fire outside.

What is the "go-to" canned soup to use with round-steak?

Because of its cheap accessibility and versatility, round steak is one of the cuts of beef that enjoys venerated status among the Amish and Mennonites. You can do a lot with a little and this Amish Oven-Baked Top Round Steak  is a testament to that. My parents tried it out and really liked it.

I like this type of cooking because you can mix and match according to your own taste. They did not, for instance, have dry onion soup mix, so they just used chopped onions. Dad thought had they had onion soup mix the supper would have been a little less liquidy, so root through your pantry for some of the dry soup mix. I know you have some back there somewhere.

And they didn't have a can of cream of chicken soup, so they used two cans of cream of mushroom and they added some sour cream. Dad said it turned out wonderfully, perfectly fork-tender. I'd try to stick the recipe if you have the ingredients, but if you don't, yeah, experiment away.

While this recipe calls for cooking in a glass baking dish, you could try it in a Dutch oven.  Whatever cooking method you choose, this will be one of the top round steaks you'll try!  You get a delicious broth as it cooks and, yeah, this is good stuff.  A touch of red wine vinegar as it cooks is also a delightful addition.

Of all the round steak recipes I have seen, this is one of the easiest.  You can cut it up and do it in a stir-fry. You could douse it in Worcestershire sauce, soy sauce, or steak sauce when you are ready to eat.

Now, here are some photos and the recipe. Enjoy!

Top round steak is a cheap cut of meat, but you should still go for the best most lean kind you can find.

Spread the soup over the steak, but also any other seasonings not listed below can go in here, perhaps some black pepper, seasoning salt, and any other marinades.

Brown gravy is a great companion to the steak, but you can experiment with gravies. This is also the part where you can add in some carrots and perhaps some rice or noodles.

This makes for a wonderful and affordable steak dinner! Serve with some sliced tomatoes on the side. And be sure to follow proper cooking process for meat and getting the best internal temperature. Texas A & M puts out a good guide. 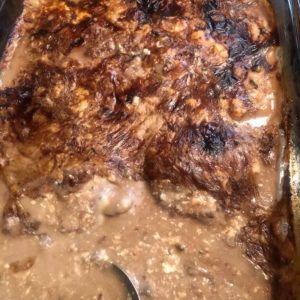 Tried this recipe?Let us know how it was!
« The Amish In Winter
Amish Trending Recipes, 1-7-2023: Baked Swiss Cheese Chicken, Tomato Soup Cake, Cornbread Salad, and more! »