Man, this Amish Pumpkin Crunch is a good recipe.  Gloria had included it in her column that ran this week, but I decided it sounded too good to use without making it and posting photos.

Pumpkin is a prized end-of-garden delight on most Amish farmsteads.  The sprawling vines and orange orbs of goodness signal that the end of garden season is approaching and what better way to showcase that than with fun, festive pumpkins?

Pumpkin can be home-canned, used in crunches, spreads, breads, pies, and, in this case, crunches.  Delicious, delicous crunches!  Bunches of crunches!

I love driving by Amish farms this time of year and watching the pumpkin harvest.  It’s a whole-family affair with the adults and teenagers heaving the heavy pumpkins from the field onto a wagon, usually.  And the younger kids will help pack them into boxes as the horse pulls everything along.  I’ve seen it many times and it never gets old.

For the rest of us, here is how the Illinois Agricultural Extension agency recommends harvesting pumpkins:

Pumpkins can be harvested whenever they are a deep, solid color (orange for most varieties) and the rind is hard. If vines remain healthy, harvest in late September or early October, before heavy frosts. If vines die prematurely from disease or other causes, harvest the mature fruit and store them in a moderately warm, dry place until Halloween. Cut pumpkins from the vines carefully, using pruning shears or a sharp knife and leave 3 to 4 inches of stem attached. Snapping the stems from the vines results in many broken or missing “handles.” Pumpkins without stems usually do not keep well. Wear gloves when harvesting fruit because many varieties have sharp prickles on their stems.

Okay, now to this amazing recipe for Amish pumpkin crunch! 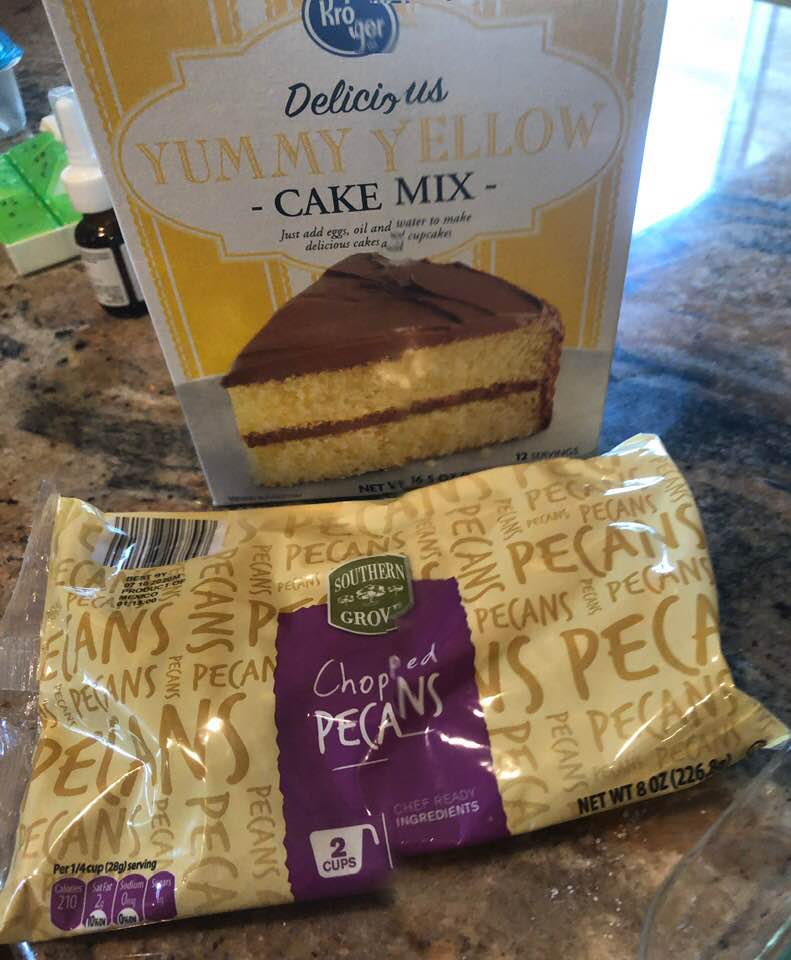 Homemade pumpkin crunch has a box of yellow cake mix, which makes everything taste great! 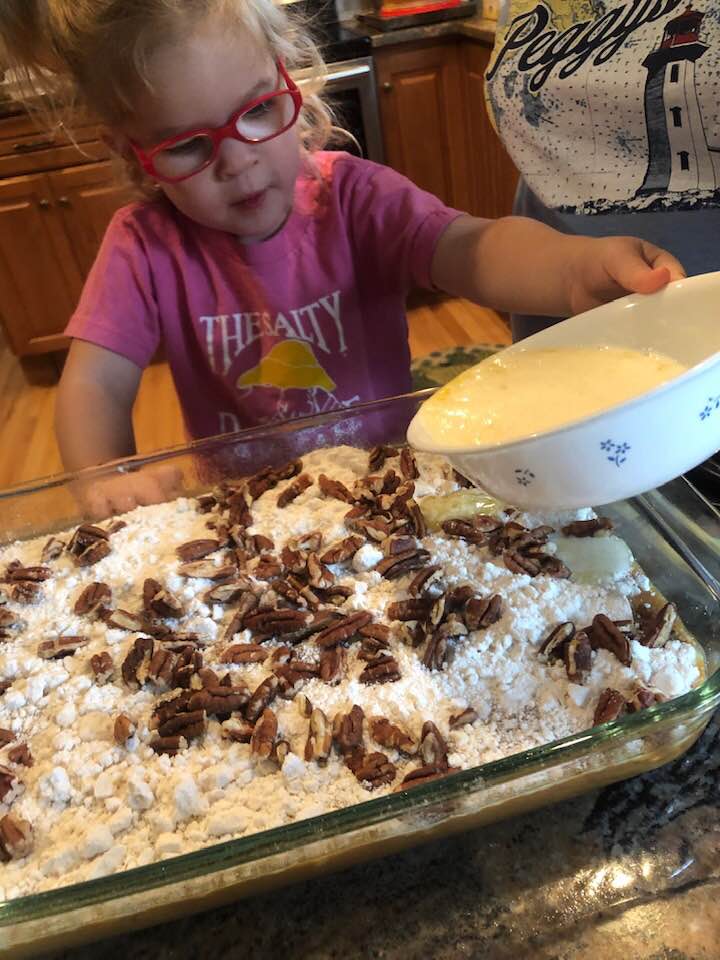 Beatrice pours butter over everything… 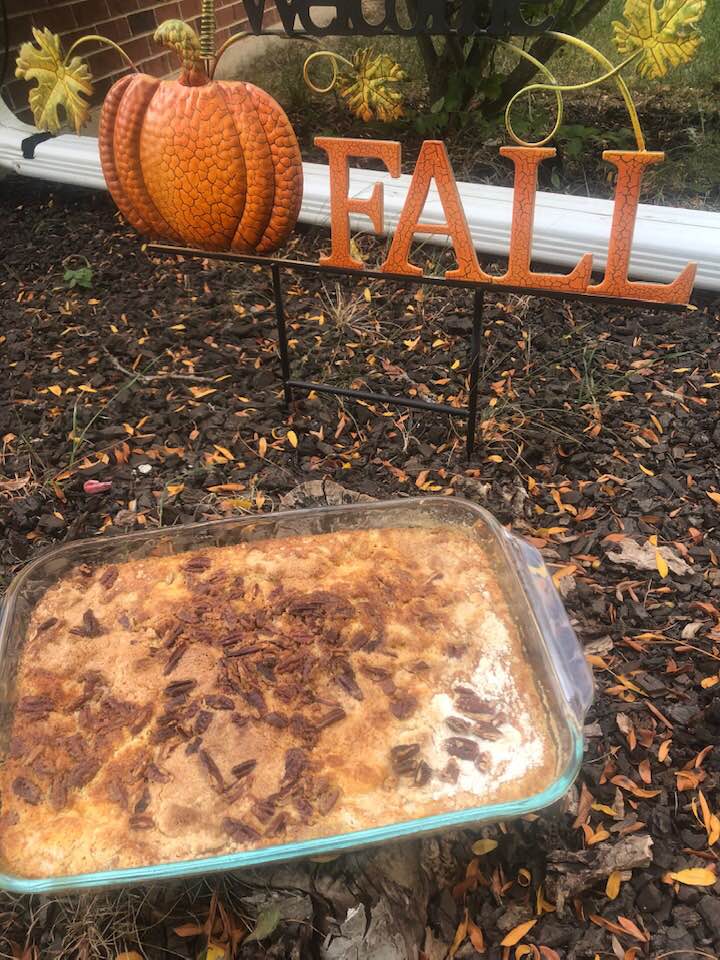 Pumpkin crunch is perfect for fall! 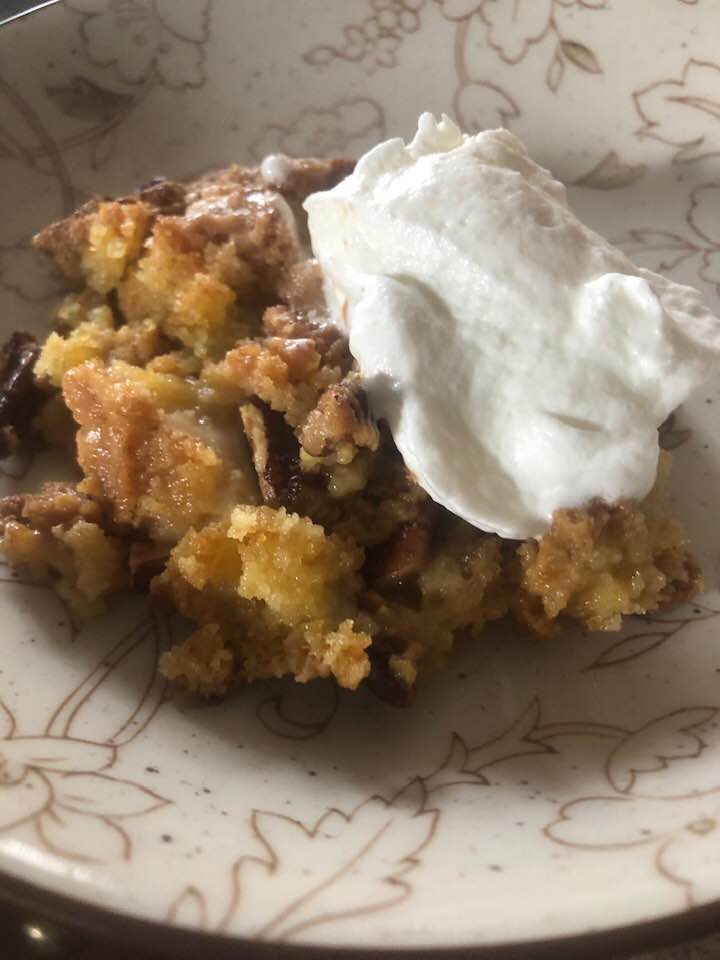 Gloria does not use, by the way, boxed cake mix, she just mixes up her own.  It is a favorite in the Yoder household year-round using canned pumpkin!