This article is a part of "The Amish Cook Column", a weekly series of featuring a story & recipe from Gloria Yoder, Amish wife & mother of six from Flat Rock, Il

A quick glance down our small gravel road showed that the children were correct. The long awaited  trip had arrived. We were all at the end of the driveway, bundled up for chilly January weather, with six children and luggage in tow.

As the bus driver opened the doors along the side of the bus for Daniel to put in luggage, the children and I headed for the 35 passenger bus, which was already almost full with church family. We found several seats close to the back to host our family. The children were especially impressed to have a little table where four of them could sit while traveling. In no time we were all settled in (this time instead of five car seats to strap in, there were none) and we were headed down the road to pick up the Wengerd family.

On the move once more we launched into our five and a half hour trip to Tullahoma, Tennessee where my cousin, Caleb, was getting married the following day. He had lived in our community during all his growing up years, and had recently moved to the Mennonite church in Tennessee, now our entire church was invited, with most of us attending.

You know how it goes, before long the children were asking for homemade bologna with crackers or bean brownies we had brought along. Taking our little alarm clock from the tote bag, I set it on the table and told them that whoever wants to, can eat a little snack now, or if they wait another five minutes they can have a bigger snack. Jesse debated, the others said they'll wait, finally he decided that that may be the better option. Five minutes later when they were all snacking we discussed various aspects of delayed gratification and how it can strengthen their character.

All of my 47 cousins hold a special place in my heart, and Caleb was no exception. With him being close to my age we spent more times together and also went to the same school.

Now he found the rose of his life; Martha seemed to be the perfect fit in countless ways. Her light laugh and sunny outlook compliments Caleb’s steady, deep thinking nature.

Here we were, traveling down route 1, my heart swelled as I watched our three, four, six, and seven-year-olds, sitting sound the table with bright smiles, relishing the fact that we were having a bus ride at last.

I too, was soaking in the moment, sitting next to Daniel, sharing a book on brain function, by Debi Pearl. As a mom of growing children I am constantly on the look-out of learning new ways to equip my children to launch into life. The more I study, the more I am awed at the profound impact which is made on a child as a direct result of what he has been taught and experienced, those first years. We were intrigued with the tidbit we gleaned that, as a broken bone gets stronger than prior to the break, in the same way when a mistake has been made, and we learn from it, the brain is also strengthened. So, when we do make a mistake, let’s take heart. It’s not the end of the story, it’s only a step to make us stronger!

Now as we were nearing Tennessee, the roads grew windier and the scenery prettier. Then came the traffic jams, forcing us to inch down the highway. But, we were all safe inside, the children were warm, and we had plenty of food along for them, so I really didn’t care. From time to time I got out math flash cards for Julia and Austin to practice and sharpen their skills.

Upon our arrival, we all bailed off and headed for the motel where rooms which had already been scheduled. The children’s excitement was bursting at the seams as we headed for our room. Opening the door an unpleasant odor was there to greet us. At once we knew this would be no option. Going to the front desk, Daniel was informed that there were no other rooms available. Finding a motel room to accommodate six small children can be a challenge, even when using blankets on the floor.  After some time he was able to find another room at a motel near by.

Relieved, we joined the load now waiting for us to join them to eat at a Chinese restaurant. Now, going out to eat is something I have never done much during my entire lifetime. Eating Chinese was a new experience for me. I loved it. It brought back memories of our mission trip to China eight years ago. After supper we were taken to our motel where we enjoyed an attractive and clean room. It was worth the wait and the extra cash, to know that we’d have a good place to stay for the night and get ready for the wedding in the morning.

The next day was a day to remember. A large church facility had been rented to host all 400 people. There were so many friends and family there; it was impossible to talk with everyone I  would’ve liked to, by the time we started for home at 4:00.

I know you couldn’t be there, but do be sure to try this most amazing dessert, very similar to what they served with ice cream for lunch.  Even those who aren’t chocolate lovers will get hung up on this amazing dessert! I’ll be making a healthy version of it for Daniel for Valentine’s Day.

By the way, stay in tune for next week’s column as we’ll be reflecting more on relationships and Valentine's Day!

This Valentine's Brownie is perfect for the upcoming celebrations of sweeties. Nothing like saying "I love you" with a 1000-calorie Valentine's brownie blitz! 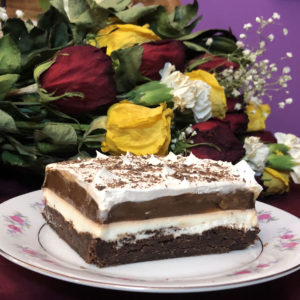 Tried this recipe?Let us know how it was!
« Delicious Dutch Meatloaf
Pennsylvania Dutch Pork Chops »