Julia and I were making several types of energy balls when Daddy walked into the kitchen announcing his plans to head back to the pond and tackle his project of seining out the large catfish before winter. "Mom, may I go back and watch?" Julia wanted to know.

"Do your after-school chores. Then you're free," I told her. Streaking here and there, she wrapped up her jobs then headed back beyond the pasture, which is home to our two horses and steers.

Curiosity took over. I had to go back and watch too,  besides, what man doesn't enjoy having his wife watch him tackle difficult tasks? As soon as the little boys had awakened from their naps, we were off, leaving the kitchen as is. As we neared the pond, little Joshua began getting all excited. His excitement knew no bounds as he heard his older siblings calling him from the banks.

Scanning the pond, I spied Hubby wading in what was left of the pond after it had been drained a good way. There he was, in 45-degree weather, wading water well over his knees, not to mention the foot of muck he sloshed through with every step. The long seining net was strung across the entire length of the pond to net all the fish to take out the cats to keep them from suffocating over winter when the oxygen levels drop. Rounding the pond, we joined the children watching from the bank and trying to stay out of the mud. Do all boys enjoy mud?

While Daniel, barefoot in the cold watery muck, dragged the six-foot-tall seine through the pond, he walked back and forth,  coaxing it over the muck. His dad held securely to the other end. To our delight, Grandma soon joined those of us watching. "There goes a fish. It jumped right over the net!" declared Austin.

"Red ear do that," Daniel explained.

After 60 minutes of labor, the net was inching closer to the banks.  The water swirled through the tiny space they had left. In minutes the fish were in the net, which was now folded in half with the top side with floats strung across the top, just above the water's surface. The guys knew they'd need to move fast with such a large amount of fish in a little area with murky waters. As Grandpa held to his end, Daniel kept hanging on to the other end, which was now only 20 feet away.

"Daniel, may I come in and help?" I wanted to know. He debated, then replied, it's up to you. In seconds I had taken off my shoes and socks and was at his side. I felt like a young girl once more as I sloshed through the mud.

Joshua wasn't impressed. He wasn't sure about all the ado.  Instead of quietly fishing or just throwing in fish food and watching the cats eat it, he was fussing. Julia and Grandma kept him quiet while Daniel and I helped each other sort through the fish. "Can I just grab them with my hands?" I wondered.

The big ones aren't that simple to get with your hands," he answered, grabbing another one and putting it up to the growing pile.

Inching closer to where Grandpa was holding his end, I pulled the net up out of the water for the children to see. Flashes of blue, gray, and even shades of purple flashed in the nets by dozens or hundred. "Look, isn't that beautiful?" "Don't you think that is just how it looked when Jesus was with his disciples, and they caught all those fish?" Now my mind was reeling, my heart burned within, didn't Jesus then tell them to be fishers of men? Aren't there unnumbered people who need Jesus, just as the unnumbered fish swimming this way and that, trying to find a way out?

"Children, Jesus called us to now be fishers of men. That means helping and saving other people, just as we are bringing in fish," I explained.

When Daniel had taken out the last cat, we released the remaining fish. It was hard for Austin to see the 30-inch grass carp swimming to freedom, yet knowing they aren't good to eat and need them to help keep the pond clean, he was fine with the plan. Daniel counted 22 nice cats and placed them all in the tractor bucket to go butcher them. Now, all we had left was taking the net out of the pond and hot showers. What a welcome thought!

As I headed back to the house, my skirts felt icy; then walking through the living room, I left muddy tracks with each step. I smiled to myself. Surely I don't have the chance to help Hubby with endeavors like this every day!

So, here we are; the freezer is stocked for the winter. No, we don't want fish for Thanksgiving, so why don't we do a more traditional recipe this week like these delicious pumpkin pie squares?

These Best Amish Pumpkin Pie Squares are a super recipe because, well, it tastes superb with the oatmeal-infused crust that you don't have to roll-out. This dessert is a twist on traditional pumpkin pie. This recipe gives you, instead, pumpkin pie "squares." So not only does this taste great, I also think it is superb for company. Not everyone wants a big - or small - slice of pie, and squares allow you to just put them out there and people can choose what they want.

Also, unlike a pie where you have to chew through a lot of crust, with Best Amish Pumpkin Pie Squares you get a bursting-with-pumpkin taste in every pie, there's just more pumpkin to taste. Add a dollop of whipped cream for the best taste!

So,yeah, I can think of a lot of advantages to this recipe!

Can I use squash or sweet potatoes in place of pumpkin in Best Amish Pumpkin Pie Squares?

Yes, either of those would be great, fun, and tasty replacements if you don't have pumpkin or just want to be creative!

The Amish, by the way, do often grow their own pumpkins. There is even an heirloom seed called Amish pie pumpkins that you can't buy and plant!

Squares are a great form of dessert this Thanksgiving because they are crowd-friendly. Cut desserts into squares and parcel out on plates and then no one has to touch anything but their own food! 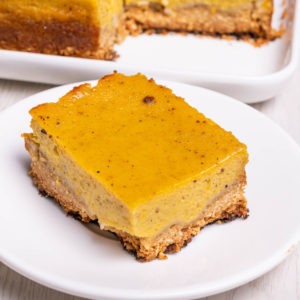 Tried this recipe?Let us know how it was!
« One-Hour Amish Dinner Rolls
Traditional Amish Pumpkin Pie »