The question has been popping up again, "Why are Amish children so well behaved?" Smiling to myself, it becomes pretty apparent that those posing the question have not seen all I've seen in this house.

Since those first months, we said "yes" to foster care, we've tried almost everything under the sun as we spent day and night with these dearest little ones. You know how it is, you love a child so fiercely, yet you get completely rung out at times.

Four years have passed since then. We are still learning. I admit, I'm glad we're not asked to do the last four years again, but I wish I could redo them somehow. If there were another opportunity, I'd be more observant of what's causing negative behavior, much more than the behavior itself.

For instance, a child who cries over everything may be stubborn, but then perhaps he's experiencing deep loneliness despite the parents' best efforts to love, love, love.  There is no child out there that wants to be bad just for fun; if that is the case (we've been there), there is a void they're desperately trying to fill. As needs are supplied for, surface issues have a way of melting like I never imagined they could. Yes, this is often a 'two-step forward, one step back' procedure. We are constantly learning and crying out to God for wisdom. He is the only source of complete wisdom.

I am more and more convinced that we adults are only grown, children. You know those times mom steps out of the living room for only a moment only to hear two or three little tikes, each declaring they were the first to have the book. Voices are raised, and things get worse by the split second. Mom's voice intervenes, "Okay, everyone drop the book." It's simple, yet from experience, they've found that hanging onto it for several more seconds will only result in being the last person on the list to have a turn.

Children don't like fights. They thrive on a peaceful atmosphere, with mom and dad singing as they go about their work. Aren't we the same? We detest conflicts and debates, yet sometimes we're caught up in the middle of them. So what can we do? And like our children, we all declare to be innocent. We know that our way of viewing things is unmistakably accurate.
My mind tends to spin over these questions way too much.

A few years ago, when we were searching for answers for our family, we made a trip to Maryland with our five little children to meet an adoptive family with 13 children who ministers to others what has healed their trauma-stricken children. After an 11 hour drive, we were most grateful to arrive at the break of dawn. The atmosphere was filled with love and security; I kept reminding myself that these children had come from the worst environments. By the end of our two-day stay, we knew without a doubt that no matter what, children could grow to be intelligent and respectful.

There was no way I could come home and push myself into a mold and be all that I wanted to be for my children, yet it was a beautiful time of learning we'll never regret. They pointed out the results of children having the opportunity to redo whatever had been done inappropriately or rudely, then practice doing it right daily until the children get good at doing it the correct way. Just as you would never think of a baseball player going on a major league team without first learning how to do it correctly then practicing till he is in full swing of doing it right.

Here at our house, the last practice sessions have consisted of literally practicing how not to throw a fit when something crosses their will and calmly express what they are feeling. Instead of telling our children not to fight, we have started to tell them what we can all help each other fight for or against, such as happiness in the family (which comes from doing things for others). As they begin getting the idea of what they're helping each other fight for, the quarrels start diminishing, and these zests to fight to prove to become channels of blessings.

Wouldn't it be awesome if is grown-ups could do that more? What would happen if we'd get a distinct goal, such as making other's lives easier and or successful? I'm like everyone else; I tend to get hung up on negatives I see around me.  But then as I open my heart to the love of a God, my heart is stilled and just like a child choosing to rest in the love of a parent rather than fighting to see who's right, I am secure. There is the no more need to fight against others, but to be there for them instead.

My grandma was truly a "grand ma" for all of us. She left a powerful example of never speaking negatively about any one, no matter what. Today I so long to sit at her table and have some of her popular homemade stuffing. Since I cannot do that anymore, I'll pass the recipe for Grandma's Best Amish Thanksgiving Stuffing on for you to try.

This is a super stuffing recipe that is a tradition in The Amish Cook's house. It does have chicken in the recipe, so some people may say "geez, do I want to deal with turkey and chicken on Thanksgiving?" The answer: yes! This is a superb recipe that complements your turkey on the table just fine. Here is a bit more information on how the Amish celebrate Thanksgiving.

Start with cubed bread for Grandma's Best Amish Thanksgiving Stuffing. Most Amish have plenty of homemade bread on hand and they'd use a loaf of it for a recipe like this.

Can I use store-bought bread in Grandma's Best Amish Thanksgiving Stuffing?

Yes, homemade is best because of the texture and flavor, but if you can only use store-bought, go ahead, it'll still turn out great!

Celery, carrots, and potatoes add crunch and color to this traditional Amish Thanksgiving feast stuffing. Diced as fine as you can. Most Amish cooks would use a paring knife and the chopping takes a long time, but you can "cheat" and use a food processor to speed up the work!

Slowly mix in the veggies to the cubed bread.

The addition of chicken, broth, eggs, and milk will moisten everything nicely.

This comes out of the oven nice and toasted, a delicious addition to any Thanksgiving feast! Lne the roasting pan with parchment paper for less mess. 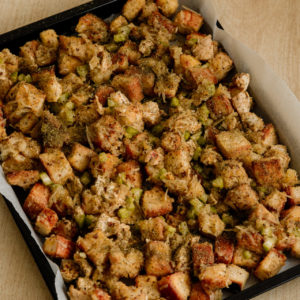 Tried this recipe?Let us know how it was!
« Easy Amish Buttermilk Biscuits
Mennonite Farmhouse Secret-Sauce Chicken »