"Apple grunt" is one of the worst names for a recipe that I've heard. But with Apples, cinnamon, and butter it makes for a mouth-melting autumn confection!

Why Is it Called Apple Grunt?

The answer that seems to be most common online is that the name probably came from the sound the pudding made as it bubbled and grunted beneath the biscuitlike topping. But one of our Mennonite readers told me this: I think that “grunt” in that recipe name is actually a PA Dutch word meaning something like earth or soil. The topping in the recipe resembles earth covering the apples.
In Dutch I would say, “I wash the “grunt” off the freshly dug potatoes, before bringing them in.” So that, to this ear, seems like a much more plausible answer than bubbling pudding!

Amish apple grunt is amazing. While I'm not sure why the recipe is called "apple grunt", it is a classic Pennsylvania Dutch confection commonly served during autumn. Anyone have any theories as to why it might be called that? It is a very good dessert, so someone might "grunt" their approval. Or perhaps as you carry in bushels of fresh apples from the orchard you'll be grunting. But beyond that I am drawing blanks. My mother had our family's monthly "Sunday gathering", where remembers of the extended Italian-American clan drop by for a noon meal, get up on family gossip, and visit. It is a delicious apple cake with a "built-in" cinnamony topping and she made the Apple Grunt for it once and it was well-received.

It is not uncommon for Amish homesteads to have a few apple trees, just enough to provide enough fruit for homemade applesauces, canned pie filling, and some breads.  Homemade, hand-pressed apple ciders are also popular on Amish farms. Imagine the amazing taste of homemade apple cider.  And enjoy a cold glass with homemade apple grunt and you'll have enough apple flavor in your system to keep you happy for a long time.    The Amish tend towards the red apple vareities, but green apples are popular in pies.

Lots of very basic ingredients in this recipe. You can pretty much any type of apple, but I am partial to Fuji or honeycrisp.

Butter, sugar, and eggs need to be creamed. "Apple season" in most USA Amish settlements begins in earnest in August and continues through to the first cold days of October or even early November.

You'll get something like this going into the oven (above).

And something like this coming out. We made it more recently and, yeah, got something similar, so the recipe works! 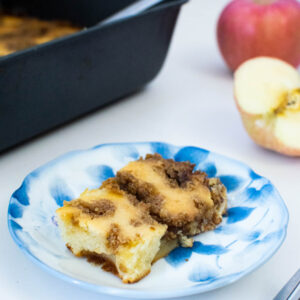