Ah, the drumstick...My brother and I would "fight" over who would get the drumsticks when my Dad would bring home a bucket of KFC for supper.

We didn't have a KFC chicken bucket often, I don't think we ate out nearly as much as we do now. Eating out - even fast-food - was a treat when I was a child. Anyway, my brother and I would both dig our greasy fingers into the bucket searching for those coveted drumsticks.

Want some drumsticks that are delicious without the Colonel's grease? Try these easy and delicious Amish oven-fried chicken drumsticks! It's that favorite piece of meat that sounds like part of a musical instrument.  Kids love drumsticks, but so do adults.  They are a favorite for feeding groups and the meat is very accessible, falls off the bone.

Most Amish farms have a plentiful supply of meat chickens to raise.  The butchering of animals like chickens is usually done during the cooler months.

Gloria Yoder wrote about chicken butchering once in a column...this is what she had to say:
Today we tackled the job of butchering chickens. The men's help was a big asset and greatly appreciated. Some of you may have heard your grandmothers talking about the "old-fashioned method" of plucking chickens. It worked well and was quite simple. The old-fashioned method involves dipping the chickens (after they have been killed) into hot water with baking soda, which allows the feathers to be picked off easily. Next, a small torch was used to singe off the last bits of feathers. After gutting the chickens, they were ready to be cut up and cooled. The cooling process is always an important step. The cold well water did a wonderful job chilling them in a short time.
Tomorrow, the chicken will be cooked in water. After it is fully cooked, the broth is drained and used for a variety of items such as cooking noodles, making gravy or soup. The chicken is again cooled and picked off the bones. It's delicious to put in casseroles, stuffing, chicken noodle soup, etc
So, a messy job, but a worthwhile one for the Amish.

This Amish recipe is for an oven-baked chicken breast that still gives it a fried feel without some of the deep fat required for classic frying.  By the way, the recipe below calls for canola oil, which is growing in popularity among the Amish.  So is olive oil. There's just a general growing awareness among the Amish of healthier habits. Not to say that some Amish still don't deep fry their chicken in lard (so good), but many are turning to healthier oils and baked-that-tastes-like-fried options. In this recipe you can use vegetable oil.  My parents used olive oil, because my Mom likes it but could result in more bitter chicken.  My parents tried this classic Amish recipe and enjoyed it very much, I am sure you will also! 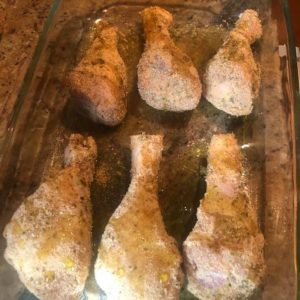