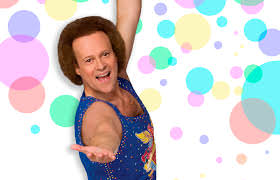 Richard Simmons, where is he?

You know, this is all quite fascinating. I'll be quite candid that I don't spend much time pondering Richard Simmons.  But, growing up, he was one of those seemingly ageless celebrities that just always seemed to be there in the background, never changing, always showing up as a guest on a late night show or a radio talk show.  There are others that fit that mold: the late Dick Clark,  Dolly Parton, Jack Hanna, Regis Philbin, Larry King,  Christie Brinkley, and I could go on and on people who, well, are famous but you kind of forget what made them famous in the first place, they're just famous.   These are all people who became well-known for various endeavors, I didn't think much about them, but it was sort of comforting to know they were around.  Richard Simmons fit that mold, he was a colorful, lively guest on a various talk shows, a successful, self-made celebrity and that was kind of admirable.

Still, a year ago Richard Simmons made the news for disappearing from sight and one year later, he has still made no public appearances.  Now this is someone who had spent the past 40 years doing everything they could do to be in sight.    So it is sort of jarring, if I spent too much time dwelling on it, that he could just disappear.

The New York Times has an article today about Richard Simmons disappearance.  It seems now there is a popular podcast (the most listened to one on Itunes right now) exploring the theories behind his disappearance. I said I don't spend much time pondering his disappearance and I guess I won't because I listened to about half an episode and then got bored.  I guess I don't really care what happened to Richard Simmons. Well that sounds harsh. I don't mean that...I guess I just mean that as long as he is acting in free will that is all that matters. I mean, I hope he's well, and if he's being held against his will, that is awful.  But he is an adult.  If he decided just to unplug and shut off the world, well, that is his business.  Still, it's odd.  It'd be one thing if he just wanted to unplug from the celebrity trappings of his  life, but he apparently has shut out everyone.

So, what do you think?  Why is he in "hiding?"  Do you care?   Should a caseworker of sorts be dispatched to do a thorough welfare check?   Oh well, if this is a topic that interests you, check out the article in the New York Times.  And if you want to go directly to the podcast click here. I will tell you, as far as podcasts go, this was super easy to listen to.  Not downloading, logging into anything, just click and play.  I might actually listen to more podcasts if they were all that easy.