Ah, as I close out 2016 I just thought I'd throw out a few more food memories.  I'm sure all of these products are still around in some form or another, but they used to be more prevalent (0r at least they were in my life). 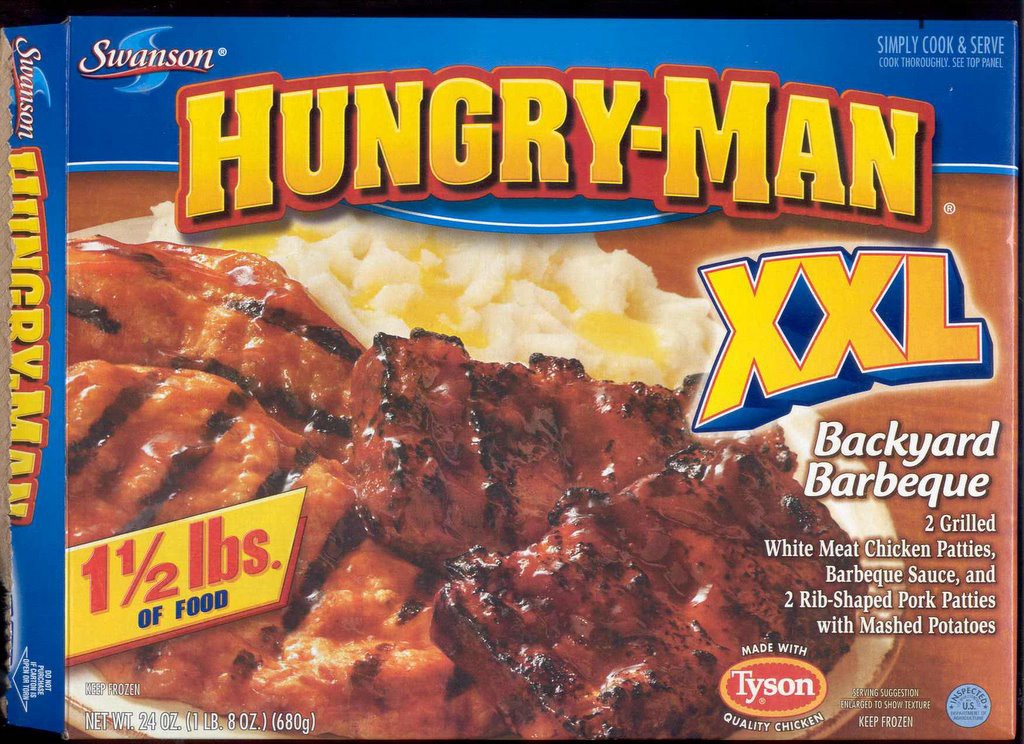 Boy, this is a TV dinner on steroids....the portions were always skimpy in the TV dinners of my youth, although my guess is, despite the trumpeting "1.5 pounds of food", I'd still not be full after eating this. And, hey, where is the dessert??

SWANSON TV DINNERS/HUNGRY MAN:  Just the whole concept of a TV dinner seems so dated.  I'm waiting for someone to introduce a "Computer Dinner" or a "Tablet Meal" because we are all sitting in front of our devices eating these days. Or what about a "Smartphone Supper."  Well, for some people, that's every supper any way.  But the whole idea of unfolding TV trays, putting your Swanson dinner on it, and parking yourself in front of the tube seems so dated and quaint.  My grandma would fix these for us sometimes and the dessert never quite cooked right.  But, sheesh, when researching this post it looks like most of the Hungry Man dinners can be microwaved. I haven't had a Hungryman dinner in probably 30 years.  Has anyone had one more recently?  If so, how are they holding up?

SHERBERT:   This is another throwback from my grandma's.   This was a non-dairy alternative to ice cream way back when. I assume they still make it, but I haven't had this in probably 30 years either.   I'm assuming more upscale "sorbets" , Hagan-Daaz's, etc crowded out Sherbert.

ICE MILK:  This is a product you'd see sold in big plastic buckets in the dessert section of grocery stores.  I seem to remember it being a "poor man's ice cream."  Haven't seen it sold in years.....anyone out there seen it?

ARCHWAY COOKIES:  I'm assuming this brand is still sold in stores and doing fine but, wow, when I was a kid these were the "upscale, classic special occasion" cookie.  I think my Dad liked his iced molasses.  These were large, soft, chewy cookies, some of them fruit-filled and buying Archway cookies,  I think, telegraphed that you had "made it."

RC COLA:  I never understood why this drink never caught on more.  This is another food memory from my Grandma's.  She'd often have bottles of Royal Crown (RC) soda in her fridge and I'd eagerly guzzle it down.  To me, it had zingier taste than Pepsi (which, bleech, I don't like) and even gives Coke a run for its money.  I still occasionally get the nostalgic urge for a cold can of RC.

Some not gone, but generally forgotten, food memories as we head into 2016....