Some Amish cooks, especially in Indiana and Iowa, enjoy making a homemade savory meat pie that resembles a tastier version of the frozen Swanson pot pies you find at the store.

We've talked a lot on this site about "pot pie soup", the traditional Pennsylvania Dutch hearty stew of veggies, square egg noodles, and meat.  It is confusing to some people when they hear about an Amish cook serving "pot pies", 99 percent of the time they are referring to the soup.  Pot pie soup is a Pennsylvania specialty of dough squares, veggies, and meat. This Old-Fashioned Amish Chicken Pot Pie is the other 1 percent! But this is a delicious dish.

I have a lot of memories of eating the frozen store-bought ones.  Those were favorites of my father.  The pies would bake for an hour and be so hot by the time they were done. We pierced the top with a fork and it just seemed like it would take forever for it to cool.  Ah, those were the days...I don't think I've had a frozen pot pie in probably 30 years.

With this Old-Fashioned Amish Chicken Pot Pie recipe, you can "cheat" and use a frozen store-bought pie crust (top and bottom). That'll save you a lot of time with making pie crusts. The peas in the recipe you can use frozen or, if you have access to fresh, those are always better. And feel free to load it up with more chicken, the 3 cups is sort of a baseline.

Make sure you use a good chicken base, that'll infuse the pie with flavor. You can also add favorite spices, herbs, and seasonings. Fresh thyme is a favorite. Or some rosemary.

These are the pot pie veggies (frozen mixed vegetables) after they've been stirred into the broth and this is what gives it that really store-bought (better than) flavor and texture. This old fashioned chicken pot pie bursts with flavor. Dice in some celery for extra crunch. Use a wooden spoon or whisk to stir in a large bowl.

You can use a frozen store-bought crust or make your own with this wonderful pat-a-pan recipe. For the top crust, you'd have to crumble it on top. Or make your own crust and lay it flat on top. Use can use frozen chicken that is precooked. We like to de-bone a rotisserie chicken and use the meat in a pot pie. We do that with casseroles also.

Seal with a top crust pastry and get ready to pop it in the oven! Cut some slits in the top to vent. Make sure the bottom crust is pressed in firmly.

Anyway, why buy a Swanson frozen pot pie when you can make your own - much better - homemade version? The taste of the veggies and meat swimming in a sauce is amazing! Check out this amazing recipe for Old-Fashioned Amish Chicken Pot Pie below! 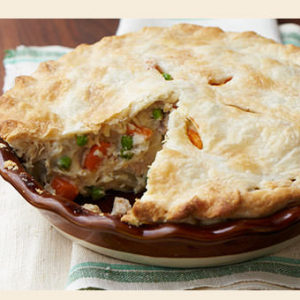 Tried this recipe?Let us know how it was!
« How Do The Amish Dry Laundry In Winter?
What Is Amish Rumspringa? »