Rich Hill Mennonites: Rich Hill, Missouri is tucked away in the far southwest corner of the Show-Me-State.  The area is home to a vibrant, produce-producing settlement of Old Order Mennonites which we profile in our book to be released next year, Amish Cooks Across America.  Yes, the community is Mennonite, but they are included in the book just to compare and contrast with the very similar Old Order Amish.  The below photo shows one of their open buggies clattering down the road. 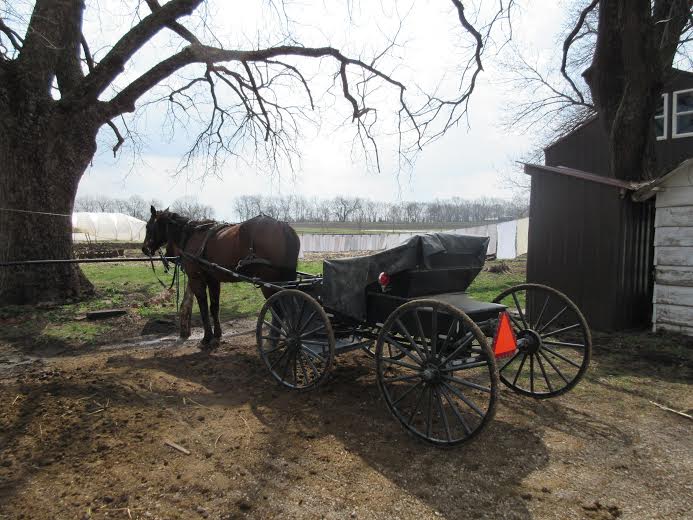 "Everyone in this community and also in the neighboring settlement 10 miles south (Richards, Missouri) raises produce. Our community started in November 1997. Everyone lived in a large "hotel" as they called it until the houses were built. There were around 5 families living in it and of course the children had grand times but the parents were glad to have their own homes. Here in Missouri there are two districts (or communities). In Kentucky there are two, Ohio, 1, Indiana, 1 and in Belize, 2.  All raise produce. The Richards community started 5-6 years ago."

"Watermelons and tomatoes are fun. There are "pickers", "catchers", and "labelers." While the pickers pick, one person throws the tomato or melon to a "catcher" on the wagon and on the wagon the young children label them.   And let's not forgot tomato fights.  "Ugh, who gave me that rotten one?"  There it goes.  Tomatoes - usually rotten ones - are flying thick and fast until Dad says "enough!."

The definition of pumpkins should be "sore backs", but really it's interesting family fun to pick the loads and loads, bins and bins full of pumpkins. It's especially rewarding when Mom makes the family's favorite pie: pumpkin pie!

The produce is snapped up by big chain stores in the midwest who know that customers enjoy the organically grown produce.  I love Arlene's descriptions in her writing and that "hotel" she talks about is really intriguing, I am guessing they just all sort of bunked down in one large building that maybe someone had bought.  The affiliations with the other churches elsewhere were also interesting. In addition to chain-store buyers, just everyday people can go to the market in Rich Hill on weekdays to buy tomatoes, cucumbers, potatoes, green beans, peppers, and one of their largest crops ... watermelons and cantaloupes.