"Grandpa's are coming!"  "Grandpa's are coming!"  Excitement reigned. Waiting can be tough for anyone but especially so for a 3 year old who is eagerly anticipating the arrival of out-of-state grandparents.  We had been counting the days until my husband's parents planned to come.  Finally, the day of their arrival was here.  Grandpa scooped our daughter Julia up and said "Hey, hey, hey!"    Julia beamed from ear to ear.  That's what Grandpa always says to her and, of course, it makes her feel so special.  Daniel’s parents live in the large Amish community around Danville, Ohio.

Grandma had purchased a little Bible which she brought along for Julia. She was thrilled when grandma presented it to her. Julia loves playing with little Bibles and taking them along to church, now this one was extra special since it was from Grandma!

Daniel's brother John and his family also live in our community so of course that means sharing our time with Grandpa's.  At first, Julia simply couldn't understand why they don't just stay at our house.  "They are also your cousins grandparents," I explained.  Reluctantly she agreed that, yes, in all fairness, we need to take turns.

On Sunday after church John’s and Grandpa’s joined us for the afternoon. We had a relaxing time together as we sat in the living room discussing all kinds of events and happenings.  In the meanwhile Julia and her cousins played outdoors.

All at once they got a bright idea of something else they wanted to do.
"We'll make a treasure hunt for you!" five year old Twila excitedly informed us.  "We’ll draw pictures on slips of paper for you to follow."

Coming to me, she asked "Do you have a treasure we could use at the end of the hunt?"

"Yes, I'll get something ready," I promised.  So I put together a “treasure” box of chocolate, popcorn and other snacks.

Julia was totally impressed with the idea of helping prepare a treasure hunt for us. Excitedly they took some papers, a pen, a scissors and set to work. After a bit Julia came and asked me how to draw a window. "Make a rectangle," I instructed .  Soon she had a drawn a whole row of windows across her paper.

Before long they had it all down pat.   They would hide slips of paper each with a clue as to where to find the next clue which would eventually lead us to the “treasure.” We all joined in on the hunt, following the trail of papers.  Soon all of us including Grandpa and Grandma were racing around in search of the notes.  From the fence by the horse's pasture to the sandbox and back to the fireplace on the deck to the garden they kept us on the go. I was impressed with the imagination they had put into practice.  One note had a picture of a pine tree. With having several hundred little pine trees it sounded like quite the challenge but finally it was found tucked into a little branch.

The final note had a crude little drawing of a kitchen table with a little dot under it.  Sure enough, upon investigating, the treasure was found under the table!  Twila excitedly passed out the chocolate candy "treasure" while I got a stack of bowls for the popcorn I had popped for them.

It was a gorgeous spring day so we took our snacks outside, sat in a circle and enjoyed it together.

"You're welcome to stay for supper," I told them all.

They agreed to stay, but told me to just make something simple.  No one was too hungry with the snacks we had just had.

"How about having a crisp with smoothies?" I asked.

Quickly I set to work in the kitchen.  Soon there was a strawberry-rhubarb crisp in the oven and mocha smoothies in the making.

These crisps are tasty yet so simple to put together for a last minute meal.  Any type of pie filling may be used.  I use my home canned filling. We like using one 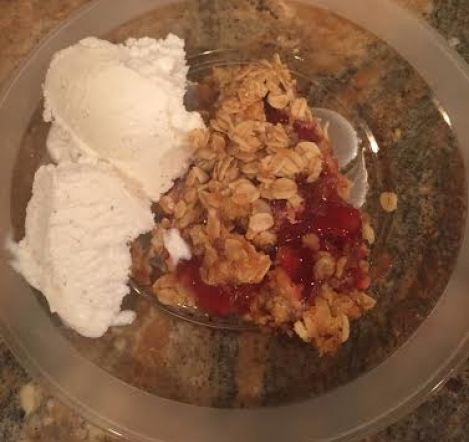 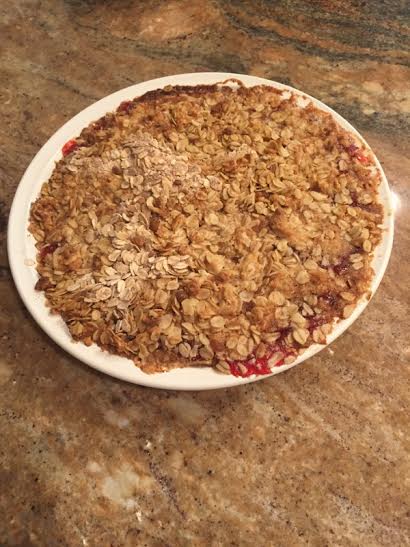 kind on half of the pan and pour another kind into the other half.  Also if time doesn't allow the crust may be omitted entirely.  Delicious with ice cream, milk or smoothies