BY GLORIA YODER
(Editor's Note: for Amish frozen cheesecake, scroll to the bottom)
You know the apprehension of waiting, the stress of not knowing how things will turn out?
That's been our story on behalf of my youngest brother, Jeriah, who is six years younger, and his wife, Esther. When Jeriah was a little chap I'd carry him all over, even though my grandma would say he's almost as big as I. Things change, he is now married and has a wonderful wife to take care of him. He really doesn't need me that much anymore, but I haven't entirely outgrown the big-sister protectiveness just yet.
After they got married a few years ago, our hearts were all touched and saddened when they experienced the loss of two miscarriages.
In the first of the year, we all shared their excitement as they announced another one on its way. Now the months and days were on a countdown. Finally, last week, we received the call that a healthy baby boy filled their arms and hearts with joy and gratitude. 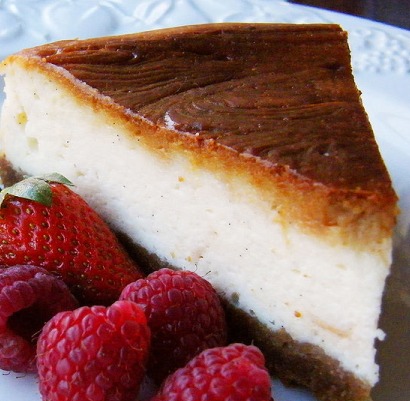 Mmmmm, cheesecake (this is a stock image, not Gloria's cheesecake)

With them having moved to Tennessee a year ago, we knew that a trip had to be planned to get to see the baby. That's just what we did; it did not take Daniel long to hire a driver with a van big enough to accommodate our entire family. As you can imagine, I was worried that we'd tire the new mom with our clan, but they assured us that we are welcome and that we could sleep in their basement, which is decked out for guests. It was a deal. Five days later, we were all packed up, making the 300-mile trip to meet the new family member.

We had not yet seen their new home; as we neared, everyone craned their necks to see what it would be like, but the best part of all was stepping inside the door and seeing Jeriah with a big grin and a bundle in his arms. It was true. Now I'm sure you're going to think I'm a partial aunt, but he is one adorable little bundle. A whole bunch of black hair graces his round little face. Isn't it something how those little ones lap up all the love that is poured into their little hearts?
It was almost supper-time when one of their church ladies brought in a home-cooked meal, enough for all Jeriahs and us. All I needed to do was heat it, and we had a yummy supper of a creamy green bean casserole, creamed sweet corn tossed salad, and cheesecake with strawberry pie filling on top. The strawberry filling tasted so fresh you could almost imagine she had picked the berries fresh from her garden that morning.
It was a fantastic feeling for me to get supper on and take care of the dishes for someone else. So many times since we've become foster parents, others have been reaching out to us, and now for once, I could be in someone else's home, helping them!
It is kinda like Julia said, "Being at Jeriah and Esther's house feels kinda like being at home." The evening passed swiftly. The following day was spent relaxing, chatting, and, best of all, holding the baby.
By 4:30 in the afternoon, it was time to begin our journey home. So we packed all our belongings, and we got loaded up and started on our way. Everyone took a nap at one point or another, including mama, while Daddy stayed on duty. We also enjoyed some guessing games with the two oldest children. Best of all was when Austin had picked someone. We knew it was one of the churchmen, but we couldn't figure out who it was. We were convinced we had covered every one of the men, yet four-year-old Austin kept saying, "No, no, not that one!" Finally, it dawned on me, "Daddy!" I nearly shrieked. We all burst out laughing, how could we all have missed guessing our favorite person in the entire church?
Okay, let's wind up with a frozen cheesecake (cheescakes are popular in the Yoder home, try this lemony one also). I did not ask Lizzie, the kind-hearted lady, for her frozen cheesecake exact recipe, so I'll be sharing ours, which is similar.  Also, if you don't like the idea of eating raw eggs, replace it with a can of sweetened condensed milk to keep the right consistency, then omit the white sugar.
The Amish Cook - Amish Frozen Cheesecake