When I first began writing articles for Kevin eight years ago, I was given this sticker “The Amish Cook”.  Now I don’t consider myself an outstanding cook. I’m just a common Amish lady who enjoys cooking for her family or whoever needs a bite to eat (stay tuned for Best-Ever Zucchini Patties).

Cooking Daniel’s favorites was a highlight to me. His “Mmmm...” rings in my ears as he bit into a fresh cinnamon roll with caramel icing. He enjoyed caramel frosting so much that I’d tell him it’s actually healthy for him to eat it, because he gets so much love from his wife through it! Julia and I would often smuggle extra frosting on his cookies or cake. As we so keenly miss not serving his favorites we’ll never regret the extra efforts for even a moment.

When Julia first asked if she could make cinnamon rolls after Daniel had gone to be with Jesus, I found myself reeling for an instant. I couldn’t say no.

As we worked together, I found myself just winging through the whole process a moment at a time… rolling them out- use plenty of butter and cinnamon for daddy- but no…! There were no options but to just go on and give each segment to God. When it came to serving them, we knew Daddy would need a plate, so we placed a piece at his spot on the table. I was unsure on what we’ll do with it, as we all knew he won’t be here to eat it- no, not a chance. As we enjoyed ours the best we could, we talked about how Daniel has things in heaven way beyond cinnamon rolls.  As we finished our last bites, an idea popped in my head.  “Daddy would share with us!” I told the six little ones seated around the table. Using a knife I carefully sliced his piece in slivers for each of us, as a token of love from Daddy.

Now talking of tokens of love, take this: Last week I was in the office writing when Hosanna walked in. Beaming from ear to ear and eyes aglow, with complete confidence she declared, “I heard a voice from heaven. And it said, ‘ Happy birthday Hosanna, I love you’!”

I felt a tad skeptical, but the glow on her face could not possibly be fake. “You did? What did it sound like?”

My mind flipped to the accounts in the Bible where angels ministered to people in need. Reaching out, I hugged her tightly as we marveled together.

Later she said, “The voice came from right over here, but I couldn’t see anything. And Joshua hollered just then, but I could still hear Daddy.”

Daily we are comforted by the grace of the One who is in Daniel’s presence this very moment as I write. We know in the end it will be alright, but we do hurt. Like Daniel used to say in  situations when it was hard to let go of something, “Well at least you have good memories!” Yes, we do.

And I admit all the good memories of cooking for this guy who had such an interest in food quality, taste, and texture does leave me feeling raw as I think of cooking thousands of meals in the future without having his take on them. But really, it’s okay, I told the Lord I’m willing, so I will walk this journey. And you know what, I think I’ll only take one meal at a time!

Today Daniel’s sister Mary suggested having zucchini patties for lunch. We looked at each other with mutual feelings, too deep for words. So we left the extra words out. For lunch she once more these old faithful patties which she made countless times when she worked for us two years ago, after Joshua’s birth. Daniel used to say, I can eat lots of zucchini patties, don’t feel bad making them again!

They were always a treat and made just perfect even though she did not even go by a recipe. I don’t have that touch just yet, so I opt to go by a recipe, which I’ll give to you for a try. When you do bite into it, think of Daniel and the many patties he ate on a sandwich, topped with a slice of cheese and tomato to top it off. And no, his sandwich never did have cucumbers on it. To this day none of the children (besides Julia) knows that Daddy didn’t like fresh cucumbers! He wanted his children to eat them unbiased on the fact that it just wasn’t something he enjoyed. He was always happy for me as the first baby cukes were big enough for me to chop down, but he would not bother to eat them.

These Best-Ever Zucchini Patties have pretty basic ingredients. And you can use store-bought Bisquick, but Gloria uses her own homemade version.

These really are the best-ever zucchini patties! Also, here are 10 tips for growing your own zucchini! 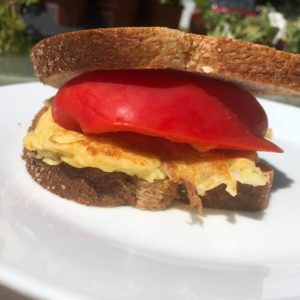