Editor's Note: Gloria is taking a much-deserved summer break to visit family in Ohio. She'll return either next week or the week after. Just Plain Rosanna columnist, Rosanna Bauman, is filling in this week. Rosanna, 27, is Old Order German Baptist Brethren and lives in Kansas. The Brethren are a "Plain" church but different from the Amish in theology and doctrinal interpretation. 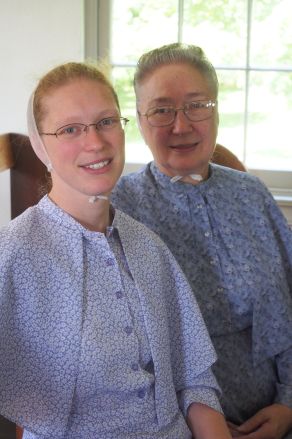 Rosanna and her grandmother on their history tour. This week , however, she writes about meeting Herman for the first time.

The first time I  met Herman, it was under somewhat somber circumstances, but it was definitely laughter at first sight. It was nearly a year and a half after my maternal grandmother’s death until we gathered to divide up her possessions. This naturally included her recipe collection. We quietly passed around Grandma Nead’s stash of hand-written cards, savoring memories of the many dishes she had lovingly prepared for her family. Suddenly, my eyes caught an old newspaper clipping: “Herman Starter?!” I burst into unexpected laughter. What in the world was this recipe for Herman? I had never heard the like. It is, apparently, a sourdough-style quick bread similar to the Amish Friendship Bread, but uniquely umm, Herman.

Now, if more young girls realized that there was such a thing as a Herman Starter, there may be more girls whisking up this recipe with romantic notions in mind. I know they say that the way to a man’s heart is through his stomach, but I do not know if the results would be the same if one admitted to the boyfriend that the delicious bread he ate was Herman.

Like any good male, Herman needs to be fed. Unlike most males, he only needs fed every 5 days. I am considering giving Herman Starter to some of my likewise unmarried friends as an old-maid joke. After all, what better fellow could a girl ask for than Herman? He sits quietly in the corner of the  kitchen, never tracking mud in the house. He doesn't need someone to cook for him three times a day, and when he does require sustenance it is a simple diet of milk, sugar, and water. And I'm sure he‘ll listen quietly whenever you  have to  unload  about your  stressful  day, no matter  how long or tearful he telling.  Plus, he smells good, like cinnamon and  nutmeg  instead of oil and  sweat. What  more  could a girl ask for? Okay, I  admit he probably won’t contribute much toward the household finances,  but you never  know.

That’s probably enough snarky comments about poor Herman, but that’s exactly what I like about him is the potential for humor. I have no clue just what kind of history this Herman Bread has. Although I  am sure it is a very  interesting  history, I  have made  no effort to find out yet as I am still   . too amused with its name to color it with any practicality. It is more fun to imagine how Herman Starter got his name than to find out that it is the name of a county where this recipe originated. And,  the actual recipe?  I can stop chuckling long enough to tell share how to make some Herman for yourself.

Mix 1 Tablespoon dry yeast with ½ cup warm water. Mix in 2 teaspoons sugar or honey, 2 1 /2 cups flour and 2 cups of warm water. Place in a glass or plastic jar, not metal. Cover the jar with a damp cloth and fasten with a rubber band. Keep at roam temperature for 5 days, then feed him. Feed Herman early in the morning with 1 cup milk, ½ cup sugar, and 1 cup flour. Place Herman into the refrigerator and keep covered. Stir Herman every day, but do not feed until 5 more days have passed. Then feed Herman another cup of milk,      ½ cup sugar, and 1 cup flour. Herman should be about 4 cups worth of starter now. Use two cups to bake Herman Bread, reserve one cup for growing another Herman, and pass one cup of Herman Starter on to a friend, because, apparently, the world needs more Hermans!