(Editor's Note:  This article describes deer hunting.   Hunting practices vary among Amish communities.  In some churches, guns are frowned upon even for hunting.  In others, guns for hunting are acceptable.  The Amish are, in most cases, pacifists and firearms are used just for hunting.   Hunting is a practice and a tradition in Gloria's community.  Deer and other wild game are harvested and used in their entirety to feed the family, something that is gaining importance with rising food prices)

The very unbelievable happened, and this time it wasn’t something negative.

Daniel was a hunter at heart and found it fulfilling to provide many a meal for his growing family by using his expertise. With his children growing older, he enjoyed teaching them the basic concepts and responsibilities of hunting, safety, and such.

Now he is no longer here. No more deer hunts with Daddy, and no more snacks being shared between Daddy and child as they waited in the stillness of the woods. We had even had babysitters whom I would accompany him on rare occasions. These were scarce chances where the two of us could talk, or whisper, without interruptions- unless a deer would come our way. Maybe more on that on another day.

Now what? What will we do?

It only seemed right for both my dad and Daniel’s dad to go on where Daniel had left off. None of the children had shot at a deer but just spent quality time with Daddy.

Sometime after Daddy went to heaven, we were surprised to have deer tags arrive in the mail for Daniel, the two oldest children, and me. Daniel had sent for them earlier. Now here they were.

On Friday afternoon Dad Yoder agreed to take Austin on a buddy stand where the edge of our woods meets the grove with 1,110 young chestnut trees.

You know how it can go. Delays happen without asking for them. At the last minute, before they left, a repairman came to work on our shop diesel, which wasn’t working correctly. He asked if he could have Dad’s help. Minutes ticked on, an hour passed, and still, this gentleman needed Dad’s assistance. Finally, at 5:30, the two hunters were off.

A short while later, the children and I were eating supper on the deck when an excited almost-eight-year-old burst around the corner of the house. “I shot at a buck! I shot at a buck!”

I set my plate down. I could hardly believe it, but his excitement showed his seriousness. In his usual steady manner, Grandpa followed him up the steps. “I think he got him.”

In a flash and a flurry, we had six children done with supper and dressed, ready to go look for the deer.

For Austin, the stress level escalated by the second as we wound through thickets and briers searching for his buck. The unbelievable moment came, “Here it is!”

Now there are no trackers for feelings in a moment as such. An unspeakable delight for my little son, who misses his daddy and now got his first deer… awed by the wonder of how God showed his loving care by giving it to us. Little Joshua snuggled close as the tears rolled down my cheeks. “It’s okay, Joshua, it’s tears of joy,” I explained.

“Austin, you are gonna get to help me decide what we’ll all do with this deer!” I exclaimed.

“Jerky, bologna, and steaks!” he declared.

Thanks to my dad for skinning it and helping with the butchering, along with my sister and husband. As you may know Daniel, he loved numbers and always enjoyed knowing exactly how many pounds of meat he got off his deer, so of course, we had to do the same, this time with his son’s deer. I was delighted with the 68 pounds of meat, which we will much enjoy!

Now I was tickled with Sister-in-law Mary’s idea of making steaks smothered in gravy. She prepared steaks like this for her cousin in Ohio, which proved to be a hit. We wish you were here to sit with us as we eat Austin’s deer steaks! Since you’re not, try it yourself, and if the recipe is too big, chop it in half or quarters.

Amish smothered steaks is a delicious recipe that is full of flavor. My parents made this last night. A few notes about this recipe: First of all, make sure you get really good cuts of tender meat and make sure you cook it enough so it won't be too tough.

Gloria has some flexibility in the instructions for Amish smothered steaks. For instance, if you don't want to make the gravy, she says you can just get a can of cream of mushroom soup and dump it over. My parents, cleverly, split the difference and used "better than bullion" chicken and cream of mushroom soup and they really liked the flavor. So if you don't have all the ingredients listed below, there are variations you can choose!

This is the meat my parents used, one pound eye of round steak from Aldi for Amish smothered steaks.

My parents used a blend of flavors.

With just the chicken gravy.

With cream of mushroom soup on top of it all.

They paired their smothered steaks with beets and potatoes. Makes for a delicious supper!

* you can substitute with more chicken base 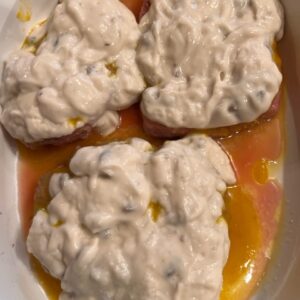 Tried this recipe?Let us know how it was!
« Amish Broccoli Salad
Amish Deep Dish Taco Squares »