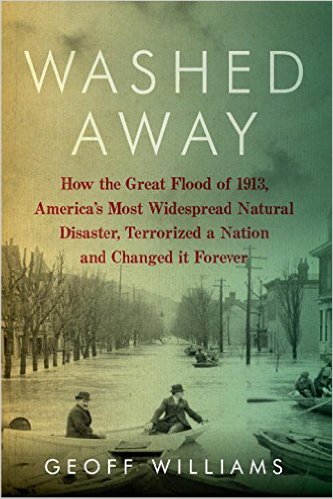 An excellent book written by my brother! Buy a copy here.

We all, I am sure, no matter where you live, you have your own local weather lore.  "The Blizzard of ____".    The "Great Flood of _____"... The drought of ___.     In my own lifetime, here in southwest Ohio there are several weather events that still cast a long shadow.     "The Blizzard of `78'".  I STILL hear about "The Blizzard of `78"....but much to my chagrin, I was six years old and living out of the country when it hit.  So I may never experience such an event in my lifetime.  Oddly, the storm was more of a wind event than a snow event.  The "official" snow totals were 6.9 inches in Cincinnati, and 12.9 in Dayton.  Decent amounts for sure, but it was the wind that made the event so bad by piling up huge mountains of snow.  But I wouldn't know. I was not there.  I also have heard a lot through the years about the winter of 1977 being so cold that the Ohio River froze over.  My father-in-law actually walked onto the frozen river. Hundreds of people did that winter.

One weather event I was here for was the "Christmas storm" of 2004.   We were dumped on with over 20 inches of snow and pretty much marooned for a week so that is one I can tell my kids about.

I also remember the great drought and hot summer of 1988.  I was a teenager working at a local amusement park working the Fool the Guesser booth.   The scorching sun was so severe I could fry an egg in a skillet on the sidewalk at the park.

But perhaps no weather event casts as long of a shadow as the historic flood of 1913.   There are still markers in my downtown that show the flood level.

The flood ravaged towns from Sidney, Ohio to Cincinnati.

After the Great Flood, the Miami Conservancy District was created to hem in the river with a series of dikes and levees and locks and was used as a model for other rivers and the Great Miami River never flooded again in the same way and supposedly never will again.  Still, I think in the end, Mother Nature is the boss and I sometimes see the raging Great Miami when it is approaching its banks and I shudder.  Someday, I fear, she'll try to reclaim what is hers...

Anyway, if you want a great, gripping read about this event, check out Washed Away.  Yes, Geoff, I did read it (that is an inside joke).  And you can even order your own copy here!

What "Great" weather events loom large in your area?