Friday morning was the hustle of last-minute detail; there was mopping the kitchen a final time, getting breakfast for the children, and dressing them in their Sunday best, and of course washing those last fingerprints from the windows. It was an overcast, but beautiful morning for the wedding.

By 6:30 a.m. the first buggies and vehicles turned into our driveway by those who had come to help with noon meal preparations.

As I met the bride and groom, I gave Carolyn a hug. Her day had finally come. She looked beautiful in her light cream gray dress. Next Julia and Daniel help me set up six chairs on the front porch for the bridal party to sit on. From there they watched people come in the driveway, some of which came to shake hands with them. Others busied themselves preparing food in the shop, placing brownies with topping and fresh fruit on individual plates, getting salad ready, and the 101 other details that go with feeding several hundred people.

Since we were punch servers we didn’t have any morning job with the food, so we sat to the side and chatted with friends and answered questions that go with hosting events. I was amazed how well things seemed to flow and how great everyone did.

By 9:00 the services began with a German hymn. As we sang rain began pelting on the roof. Silently I told God that we’d be so thankful to not have it rain during the sermon, since there was no insulation in the ceiling and with not having a mic system, it could create challenges. I felt at rest, knowing God was in charge, I was eager to see how it would come together.  As the first minister, Carolyn’s dad, rose to his feet and spoke the second sentence, the rain stopped.

My heart was deeply motivated and inspired as I listened to his encouragement of us people needing to be filled with God’s spirit and his love in order to live in his fullness. Matthew's father shared the main sermon, followed by his uncle joining their hands in marriage. My heart swelled with joy for the miracle of God binding these two pure young people as one.

Right after the service we, along with several other couples, who were also assigned to preparing and serving punch, headed for what is usually the finish room of the shop, where their was a table with instructions for doing the drink. The concentrate had been mixed prior to the wedding and placed in gallon buckets and put in the freezer. It was now ready to be chopped up and dumped into a 30 gallon container until ready to serve.

Next came lunch, and talking about some of the most amazing food. Now I’ve had mashed potatoes with gravy and chicken more often than I could ever count, but I thought this really was some of the best ever! And the wedding salad, it was as tasty as ever. When we had our fill on hot dishes, dessert was served. The individual plates with brownies, topped with creamy pink filling and fresh fruit not only looked pretty, but were delicious with individual ice cream cups.

We enjoyed chatting with others across the table from us, getting to know more people and reconnecting with those from years past.

When our plates were emptied we headed for the punch station. This time we dumped 20 ½ two liter bottles of Ginger ale into the concentrate. As we did so, we discovered that six gallons of punch mix had been placed in another freezer, thus got missed to be taken out of the freezer that morning. It was stone hard, and the guests were to be served punch very shortly. We debated, we tasted what we had. Too bland, no option. No, we don’t have a microwave to thaw it. While Daniel stirred the barrel of punch, and worked on getting the chopped concentrate to thaw out more, the other three guys headed for the house. In the bathtub they placed all six pails of frozen mix and filled the tub with steaming hot water. As the concentrate thawed, they poured it off into other buckets.

In the meantime, Julia, Austin, and the other seven children, who Carolyn had taught in school, stood to the side and sang two songs for them. I loved every bit of it.

By now the punch guys were back in the finish room, and had dumped it all into the 30 gallon barrel. Daniel gave it another good stir, and it was good to go.

In the nick of time, it was ready to serve. As the congregation sang songs from the wedding booklets that Matthew and Carolyn had put together, we served punch. My heart swelled in awe to the Lord, as they sang, “You are the One we adore, You give the healing and grace our hearts always hungers for...”

All too soon they were finished singing the eight songs. In no time the shop was filled with a murmur of voices as people on all sides were soon engrossed in conversations. By 5:00 it was supper time. After supper Matthew and Carolyn, with the help of the witnesses, opened their gifts.

By 8:00 everyone had cleared out, including the new couple who went to their new home.

It was a good day, crammed with friendships, food, but then it feels so good to just be together as family again, after it’s all past!

If you are looking for a nice low calorie supper, these Amish Cheesy One-Pot Noodles are not it. But if you want a hearty, cheesy, noodle-filled plate-piling supper, well, here's your recipe! I ate a bowl of these an hour ago - a small bowl - and I still feel stuffed.

A block of Velveeta, it melts easily over high eat but, ugh ,this stuff isn't the healthiest cheese in the world!

Blend and melt with an entire stick of butter. The recipe says to use just half the Velveeta, but ended up throwing almost all of it in and got these delicious looking Amish Cheesy One-Pot Noodles!

I spooned some of these Amish Cheesy One-Pot Noodles into a bowl and sprinkled a little paprika and some Italian seasoning on it just for flavor and color.

Let set a couple hours and the noodles are ready to stir and eat! You can always add more or less liquid to strike your fancy. 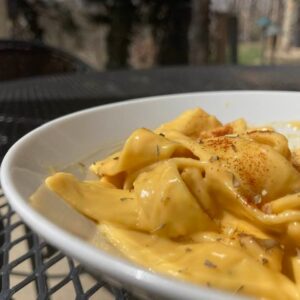 Tried this recipe?Let us know how it was!
« Montana Honey Wheat Bread
Strawberry Moon Cake »