I was looking for a recipe to make with my 4-year-old Beatrice this morning (geez, this is an old post I am updating, she is now 6!). I call our Friday morning kitchen classes "Bake School." Last week we did an Amish coffeecake and it was kind of laborious. This week, I wanted something easier but still interesting. And, sure, tasty also, makes a great breakfast, a perfect complement to something savory!

So I gravitated to a recipe for “Amish cinnamon flop cake" that I found in a slender little cookbook that I think I must’ve bought in Arthur Illinois.  Because there’s a little price label on the back that says “Beachy's“. Beachy is a common Amish name, but I usually remember where I shop and stop, and I did stop at Beachy‘s Bulk Foods in Arthur, Illinois when I visited a couple of years ago.

It’s only a 40 page cookbook, I would call a booklet, but it has a lot of neat little recipes in it, very traditional Amish ones.

So, the question that everyone always asks is why is it called “flop cake “… After tasting it, I don’t know. It’s anything but a flop, if you’re using the word in the negative sense. Some posters on Reddit have mused that maybe it’s because the cake is sort of “floppy “, between a coffee cake and an angel food cake… I don’t know. That sounds kind of lame. A writer in the Bangor Daily News mused:

the cinnamon sugar mixture will sink to the bottom to create a syrup like layer.  When it is done you flop slices of cake upside down so the gooey cinnamon part is on top.  That is where the Flop comes in!

I did not flip the cake and it still tasted great. Nor did the instructions say to flip the cake, so I didn't, but perhaps that is why it has the name.

I did use whole wheat flour and that seemed to have no impact on the outcome. The recipe called for 1 teaspoon of cinnamon, but for something called a "cinnamon" flop cake, that didn't seem like enough. So I added in two teaspoons, I do think one teaspoon would have been sufficient. But if you love cinnamon like I do, then, sure, double it.

This cake is one I know a lot of people remember their grandmother or great grandmother making. This is one of these old family recipes for many.. You don't need a mix, it can all be done with a wooden spoon and maybe a whisk.

This cake has very basic ingredients, but, wow, the taste is good!

Topping for the cake.

This is the cake before it gets popped into the oven. Now some people say you should bake it and then flip it over and cut and serve. I didn't get the memo, so I didn't do that, but it was still great. A wonderfully cinnamony flavor, and so easy to make. This cake is one of the best bangs for your buck you'll get! And on the pan size, you can use a 9 X 9 cake pan or a 9" pie or cake pan, either will work fine.

You could add some chopped pecans to the Amish Cinnamon Flop cake. Or walnuts. Either would give the cake some crunch. I don't think it needs it, though, this brown sugar-topped cake is perfect as is with its buttery brown sugar! Use a non-stick spray on the pan that you bake this in and a spatula can be used to loosen it from the sides if it sticks. I like a 9-inch pan. Some people do like to add a handful of chocolate chips, but I am not sure it needs that either. This old recipe is timeless!

Cinnamon Coffeecake - a great start to the day! 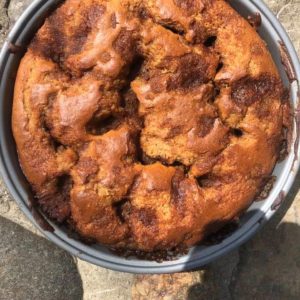