Suggested headline:   DEER MEMORIES FOR THE YODERS or GLORIA AND DANIEL TEAM UP

BY DANIEL AND GLORIA YODER

DANIEL: So we all like to make memories you know, and tonight was one of those nights, today was the last day of deer season for shotgun, so I told Julia and Austin that I would like to take them with me. Wow, excitement was in the air, they could hardly wait. I told Austin that he needs to take a little nap before we go, so that is what he did. After an hour, I woke him from his nap and told him we're ready to go. He was all smiles and ready to roll. Gloria helped get Julia and Austin get bundled up for the cold evening, with goodbye kisses to Mama we left the house.
Last but not least we had to wear orange which is required by law for shotgun season. Being dressed up in Daddy's large orange vests had the children feeling quite important.  We were on our way, all the three of us. "We are going to be hunting just beyond our field in the woods," I informed them. We made our way down thru our newly seeded wheat field and into the woods, the brush was a little tall, so I carried Austin part of the way. We were nearing our tree stand when three deer took off down thru the woods. "So we were almost on time," I thought, a bit disappointed. "Maybe we will see some later," I told the children. Soon we were carefully making our way up the tree stand and getting settled in; I was ready for a little break. First I went over some basic rules with the children and informed them that we have to hold very still. "Okay," they whispered.

We were sitting for a couple of minutes when Austin asked, "When are we going to have  our snack?" They had peeled a couple of oranges for a snack. I told them we can eat it right now, so that's what we did, dividing them among the three of us. Soon we had munched them down. "Now we can relax," I thought.  Austin's mind was reeling by now. "Daddy," he asked, "Can deer climb trees?"
I smiled, "No," I told him, "God did not design them to climb trees."
"Can raccoons climb trees?" was the next question.
"Yes, they can,"
"Even this tree, right here?" he asked, pointing to a tree 10 feet in front of us.
"Yes, they could climb that tree." He seemed to be content with the answer.
"What sound is that?" he asked next.

"It's a bird, called a flicker," I explained.

Next, I got my deer call out and grunted a little. "May I do that too?" asked Austin, full of ambition from his nap.
"Sure you can!" soon Austin and Julia were both using the grunt too, much to their delight to be able to make a weird noise like that.
To our disappointment, we didn't see any more deer by the time we had to start our 500-yard trek home. As we got back down out of the stand and I scooped up Austin again and with Julia following right behind me. We started to make our way through the brush again, taking a little different way out of the woods; we got stuck part of the way, so I picked up Julia with my other arm and plowed right thru the brush. I was relieved to get back out in the field, so with our spirits lifted a little, we finished our trek and were home in a jiffy.
Mama greeted us at the door with wide open arms and a big , heartwarming smile. I smelled something delicious, "What have you been doing?" I asked.
"Oh, I made something special," she said,
"What a sweetheart," I thought to myself. I could hardly believe it when she said she made my favorite dish: apricot pie with an ice cream smoothie to go with it! So the three hungry hunters sat down and had a feast of a casserole, applesauce, pie and ice cream. It was exceptional. Mama shared some of her interesting afternoon while we were gone, which she can share a little with you now.

In the meanwhile I was in the house, thankful for a hubby who brings home venison for our family. The bright gleam in Julia and Austin's eyes as they left the house indeed portrayed their love for Daddy and time spent with him. It was three o'clock in the afternoon when they left. I weighed my options: what really is the most important to have done by the time they return home? And, of course, my slogan still stood firm, "It's all baby permitting, they come before work." I attempted some Saturday cleaning that hadn't been checked off the list yet; I didn't feel too successful. Jesse's nap had only been half long enough. Elijah still wasn't feeling the best since he had been sick. "Perhaps I should start on supper," I mused. Opening the fridge door, I scanned its contents. Nothing seemed to click. "Lord, show me what would be a good idea," I breathed. (I have learned from my mother-in-law's example to pray about little things, down to menu planning.) As I spied the pie dough crumbs it clicked, it'll be an apricot pie for Daniel and a mini apple pie for the children and an ice cream smoothie to go with it. I tackled it with Elijah in one arm and mixing ingredients with the other. Jesse sat in the highchair eating baby food. Now if you know anything about 13-month-olds eating on their own, you know how food ends up any and everywhere, including the hair, hands, arms, and anywhere imaginable. I decided it'll be worth the time he's entertained, even if it'll take some extra clean-up afterward. Rayni stood on a chair, playing with a little wad of pie dough. By the time I slid the pies into the oven Jesse had his entire highchair tray covered with baby food, splatters on the floor where his spoon and bowl had landed, even managed to get some on his pants. Needless to say, he got a straight ticket, whisked from his perch and into the tub.
When we sat down as a family to enjoy the meal together, I knew it was worth the efforts. Nothing could beat the warmth of love we all felt as Daddy prayed a blessing on the food, thanking God for our family.
Here is our very simple ice cream recipe. The ingredients may also be placed in a blender with frozen milk cubes and blended together until smooth. 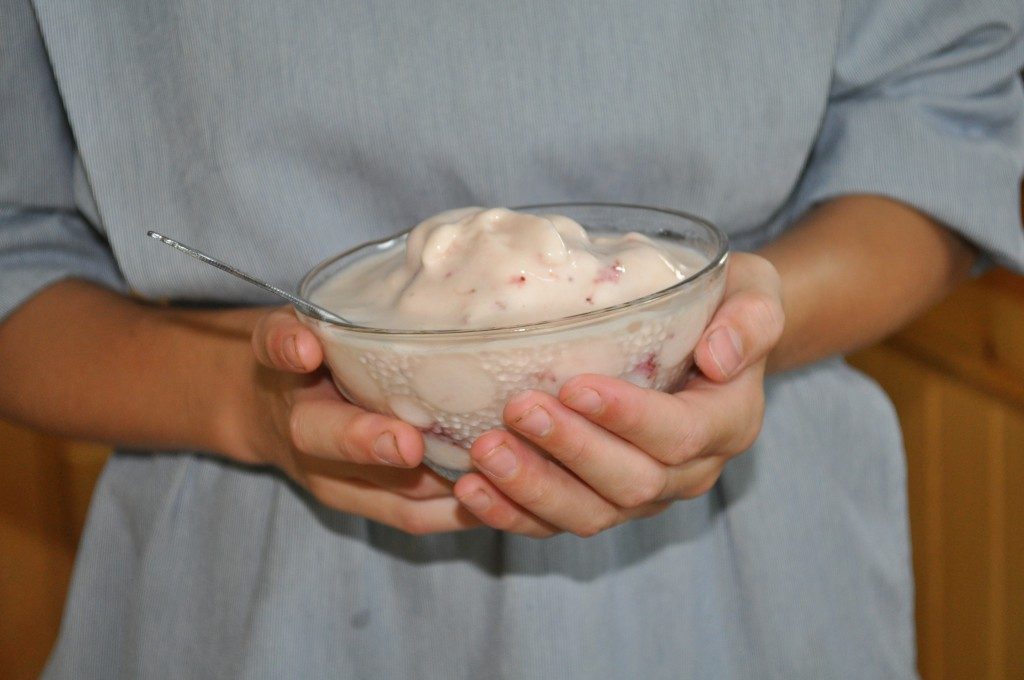 Stir the sugars, clear jel, and salt in a large mixing bowl.
Add cream, stir vigorously.
Add vanilla and several cups milk.
Pour into a 6 quart ice cream freezer.
Add milk until freezer is 3 inches close to being filled.
Freeze with ice cream freezer.
We like dividing the recipe into small batches and making it in a blender
by using frozen milk cubes to freeze it.
It then has a consistency similar to shakes or smoothies.We prefer omitting the white sugar and replacing it with ¾ cup maple syrup and 1 teaspoon stevia powder.