From my perch inside the sewing room window where I am writing, I’m enjoying birds’ morning songs. They are just going for it. I love early mornings. These last few weeks, the little boys are sleeping better and am only awakened four or five times during the night. I love taking advantage of it by enjoying more quiet mornings. It’s my time with God, it just seems to help my days flow more smoothly if I first get in tune with my Maker. Now I’m not talking about getting up with the birds at 4:30, I only wistfully think of that; why at those first cracks of dawn the birds are just about going crazy. It sounds like they are having a singing match, seeing who can praise the most and the loudest. May God inspire my heart to praise more. 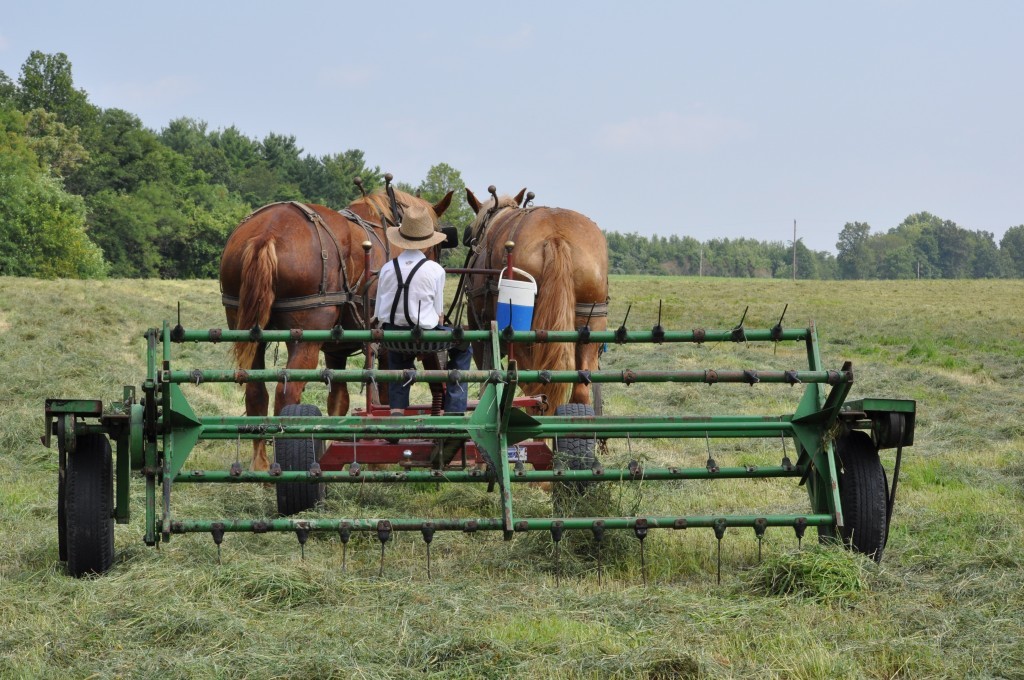 An Amish boy out in the field in Flat Rock, a typical summer scene...

This morning I took a short walk to the cabin as I chatted with God along the way. Our cabin is nestled back in the woods, just beyond our backyard and over a ravine with a little creek trickling through it. While I was back in the woods I got a notion to bring our pony over to the other pasture, closer to the house. As it turned out, he didn’t have a halter, neither did I have a rope. After petting him a bit, he remained in the pasture, exactly where he was at, enjoying his shaded spot in the woods. Before long it was time for me to return to the house, as it was Daniel’s chore time and someone needed to stay on duty for the children in case someone awakens.

I nestled down on the couch with our little ‘early bird’, Austin. It’s as I tell him, I’m glad if he's’ an early bird, at the same time we have a policy to keep everything quiet until 7:00. Looking at books is permissible, but things need to stay low key until we are ready for breakfast and family devotions so as to not awaken the other children. Anyway, soon Austin and I were snuggled up on the recliner with his favorite blanket and my favorite devotional, Jesus Calling, by Sarah Young. Out loud, I read the article for the day then reread it in Dutch so he could better understand it, explaining to him how that by thanking God for our trials he can change them into blessings. His four-year-old innocent face looks trustingly into mine, again I just breathed a little prayer, asking God for wisdom to channel these little hearts.

This is mid-afternoon. We’ve had a great day so far. The birds are now busy going about their day. The Purple Martins are still singing their songs, others are chirping at the feeder. The feeders on our back porch have attracted many feathered friends throughout the Winter months and some are still taking advantage of it during these Spring days. Much to the children’s delight, we even have a couple young squirrels that come to the feast at the feeders.

The Purple Martins have been a family favorite for almost as long as I can remember. As a little girl, Dad took a keen interest in them and helped my brothers build houses and put up gourds for their nests. My brother Micah toiled faithfully as he used gourds we had raised in the garden, cleaning them out, drying, painting, and hanging them up on a cable for a shelter for the Martins. I was always intrigued by Micah’s talent for making observations and caring for our favorite feathered friends. He knew exactly which of the 66 nests were in use and which were empty. Interestingly enough, he reported how the same pairs of Martins would come back each year after traveling thousands of miles when they return from migration, and return to the identical nests they had the year prior.

Now for winding up with a family-friendly recipe for you all. When I asked Julia what we want for supper she didn’t hesitate as she popped off with, “Toasted cheese sandwiches!” I know it really is a very basic recipe, but then, those are the ones we often miss. Besides, they really are super simple for a busy mom or anyone looking for a quick last minute staple.

Okay, so I grew up with a very basic version, then Daniel came along with all these fancy ideas of opening them up, adding a nice layer of barbecue sauce, mayo, and some sort of meat- he really doesn’t care what kind of meat, it can be bacon, pepperoni, hamburger, or whatever. He really doesn’t care what kind, as long as it’s some sort of meat. Oh, now I remember, as a girl I liked spreading a layer of jam on top, (don’t gag),then slicing fresh radishes on top of my toasted sandwich. I used to think it’s just the most amazing combination.

Julia came to me this afternoon and asked, “Mom may I make a toasted cheese sandwich for Elijah?”

“Why sure,” I responded. The other children were all taking naps and I was engrossed in my writing so I was all too happy to have something to entertain both of them. As it turned out Elijah was pleased and so was mama to have a big little girl that is learning how to cook. By the way, since school is out she has been knee deep into baking bars and cakes. I’ll be passing on some of her recipes in the near future. So for today, here is our version of toasted cheese sandwiches, or as my sister-in-law always called them, cheese toasties.

Heat a skillet over medium heat, put in a chunk of butter (I use about 1 teaspoon per sandwich) melt, then place a sandwich breakfast with two slices of bread with plenty of cheese tucked in between the slices. Toast until nice and golden on both sides and cheese has melted. Slide your cheese toasty onto your plate, enjoy as is or open it up and add any of the remaining toppings that strike your fancy. Additional items such as lettuce, radishes, and cucumbers are also delicious. If desired, flour tortilla may also be used instead of bread.