Good morning from the Yoders, These quiet, pleasant mornings are almost addictive, once you get started, it's hard to miss a single one. For years I've dreamed of being able to rise earlier to soak in the wonders and freshness of the morning, yet with rising many times during the night to attend to the needs of little ones, I just couldn't make the pull. It's so amazing actually to see the children growing out of baby stage (yet the baby stage is a favorite of mine- a paradox, I know). And yes, you all were right, I need the reminders you've been giving me that they do grow up so fast. Often when you are in the middle of something, you don't see that side as much. (Oh, and stay tuned for Gloria's Amish Pizza Spaghetti below!)

Daniel and I look at each other and shake our heads, wondering where the last ten years of marriage have gone. With increasing responsibilities, seasons of life seem to pass swifter than ever. How swiftly then will the next ten years glide by? I liked how Jeanette, from Dayton Ohio,  shared a quotation from her high school history teacher who put on the blackboard, "Time is. Man marches on." How profound. It's my seasons changing; God's time is actually not being altered.

As a child, I remember counting how many nights I'd have to wait till I could spend the night with Grandpa's, now my children are the same way. To them it felt like the time would never come for the camping trip Daddy had promised. Finally, one day Julia and Austin helped each other make a paper chain with 100 links, taking one off every day would bring them to a count down of the long-awaited trip. The details of the trip aren't finalized, we'll keep you all in the loop if the day ever does come!

I get a chuckle out of Daniel's view of adding years to his life. He says that he's excited to grow older. His theory is that as he embraces old age and looks forward to it, it won't seem to happen as fast, either! Ya, it takes Daniel to come up with that one. The children all have their own things they are eager to do or accomplish as they grow up.
Julia, eight, is eager to keep growing up and being our young lady and right-hand helper with the children and housework. She dreams of having an orphanage someday.
Austin, five, can't wait until he's old enough to help Daddy in the shop. He thrives on using wood scraps, hammering or drilling them together to make hooks or 'doll beds' for Mom or one of his sisters. I'm eager to continue watching him grow up; what he does is done with his whole heart or not at all.

Rayni, three, has a soft mother heart and loves babies. She keeps asking when she'll be a real mommy. Again I'll explain to her that we do not know what God has planned for her life, but perhaps once she has grown up like Mama she can be a real mommy. Next, she's making big plans of being Jesse's mom. Gently, so as not to pop her bubble, I explain once more that Jesse will also continue to grow older, right along with her. Truth be told, even though they are 15 months apart he has almost caught up with her in size.

Now Jesse, two and a-half, will surely be into some sort of adventures. He thrives on 'cutting down trees' with his toy chain saw, climbing up as far as his nimble body will take him, and driving his big loader, hauling huge loads.

Elijah, who just turned two, is into balls and bats more than our other boys were at that age and is completely proud of his skills. He also thrives on being outdoors, tagging after Daddy. I just love watching him try to keep up with the older boys. His look of pure delight as he accomplishes his goals is priceless. Yesterday when Jesse mastered how to ride or push a scooter without falling over he was of course applaud for his accomplishment. When Jesse was done it didn't take Elijah long to be riding it just like Jesse.
Now what is Mama looking forward to while the hands of time keep ticking away?

Perhaps what I think about the most if I do take time to think about the future is simply to have an ever closer walk with my Maker and Savior. There is nothing more rich and meaningful to me than to commune with Him, and I know there really is so much more there for us yet, as His dear children. I am excited to work for him till the day I see His loving face. I know it will have been worth it all.

Now for a family favorite recipe to wrap up. Julia has been begging me to let her make spaghetti for dinner, so here's Daniel's favorite Amish pizza spaghetti.

🥕 Side Dishes that pair well with Pizza Spaghetti

Add some pork to your pasta! 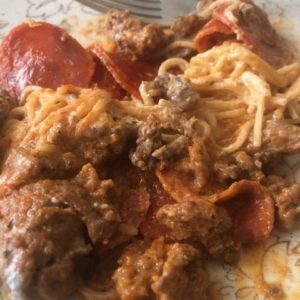 Serves 8 to 10, feel free to experiment...olives and mushrooms and be omitted altogether or pile on more if you like them!
Tried this recipe?Let us know how it was!
« Weekly Blogroll: "Crack" Green Beans, The Indiana Heritage Trail, Log Homes, Mennonite Impossible Pie, and More!
Amish in the News: Cheese Online, Mennonite Life, Millie Cans Rhubarb, and More! »