Who hasn’t watched Christmas Carol and salivated over the scenes with flaming puddings?  There are also songs about “figgy puddings.”   Some definitions of figgy puddings say:  “Figgy Pudding is a vague term used for a class of traditional Christmas dishes usually forming sweet and savory cakes, containing a sour-sweet creamy layer of honey, fruits and nuts.”

The article describes the pudding as:

By the 19th century the ingredients were more or less standardized to suet, brown sugar, raisins and currents, candied orange peel, eggs, breadcrumbs, nutmeg, cloves, allspice and plenty of alcohol.

So, we have a class of puddings with a rich, colorful history.  But what happens to this same pudding makes its way into Amish culture?

First of all, “plum pudding” isn’t really plum pudding.  At least very rarely.  Plum pudding – like figgy pudding – is sort of a catch-all term for a class of puddings.  Most plum puddings just contain raisins, currents, or prunes, usually dried.  I suppose there’s a recipe out there with plums, but rarely.  I actually was pretty bummed when I learned plum pudding doesn’t contain plums (well, it has prunes, which are dried plums, but still not quite what I was thinking).

Anyway, what happens when a throw-together pudding with a bunch of ingredients gets into an Amish kitchen?  Answer: it gets simplified.  I got this Amish Plum Pudding recipe years ago from an Amish cook in Ohio and it only contains 5 ingredients, far less than the typical dozen or so ingredients you might see.  A typical plum pudding, you can throw in a cup currants, carrots,  pineapple, pears, cinnamon, molasses, and more. Some people throw cherries in or dump some orange juice in or even make a pecan version,

And here’s something funny, this plum pudding actually contains pudding.  That’s something you rarely see. I have seen some Amish recipes from 50 years ago or more than call for suet, but this recipe - the one I am posting - has no savory component.

You can use butterscotch or vanilla.  Not sure chocolate or cocoa really works well here.  Anyway, this is a funny recipe in terms of the historical bears of plum pudding. This is a simple, scaled-down version.  Definitely delicious and worth making, but not necessarily what one might think of when they think of the Cratchits and plum pudding.

Prepare the pudding. We used vanilla pudding, but you can use butterscotch. Either one would work. Use a whisk on this part.

Plum pudding with no plums, but actual pudding! Underneath this pudding is a layer of graham cracker crumbs, it just is nice to have those on the bottom.

This is the fun part, you cover the pudding with marshmallows, walnuts,graham crackers, and pitted prunes. But you can add other stuff if you want like raisins, currants, pretzels, really, anything but the kitchen sink, and you could try that too.

Then cover the whole thing in a crunch layer of graham cracker crumbs. You really can't go wrong with graham crackers in anything. I like this pudding because there's nothing to bake, no oven to worry about preheating. Just a saucepan on top of the stove.

Scoop into glass serving dishes for a delicious dessert. I do think you could "spice" up the pudding a little bit by adding a teaspoon nutmeg or a couple teaspoons cinnamon. When you are done, cover with plastic wrap and stick in the fridge. 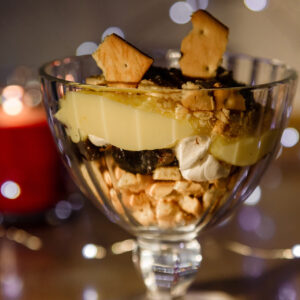