This is one of my all-time favorite Amish pies. Sometimes this is just called Amish vanilla pie, but if you make this version, with the crumb topping, then it becomes this classic Amish pie. It's perfect for Thanksgiving.

You can make this is in a make in the pan pie crust, or you can use whatever recipe is your favorite unbaked crust. Just flute the edges for the best appearance on the crust. This is pretty much just a stir, pour, and bake pie. So easy to pop into your oven and just enjoy the aroma that will fill your house.

For the actual filling, Amish Vanilla Crumb Pie has such basic ingredients: corn syrup, brown sugar, butter, an egg, and a few other basics that combine to deliver super flavor. The two teaspoons vanilla extract in the recipe add enough flavor, but if you really love vanilla, you could add another ½ teaspoon. I love vanilla but I find too much - even in vanilla pie - can be a bit overpowering.

In a large saucepan, over medium heat, make sure you don't scorch the filling. Keep stirring until the mixture boils and then turn off. Again, don't over boil. I think the filling, a sticky, delicious syrupy/brown sugar mixture is perfect the way it is, but you could add a pinch of nutmeg or even a teaspoon of cinnamon if you wanted to experiment with flavors.

Amish Vanilla Crumb Pie is amazing with a scoop of vanilla ice cream. This pie is one of those classic "bare pantry pies" that creative Amish cooks are so skilled at making. There are plenty of similar pies, like vinegar pie, that kind of meet those bare-bones criteria, but vanilla crumb pie bestows a certain elegance on the Thanksgiving table.

The Great Depression influenced Amish baking and cooking greatly and that is why you see a lot of these very basic pies with just a handful of ingredients, but the way in which the ingredients are handled makes all the difference. You can use just an aluminum pie plate for this, but I think ceramic or glass performs better.

Reader Dee C. in Wooster, Ohio was kind enough to make the Amish vanilla crumb pie that you see in these photos.  But, first, I'd be remiss without a word about Wooster.

Wooster is a unique place, the county seat of Wayne County, Ohio, on the edge of Amish Country.  I was a featured author at the Buckeye Book Fair held every November on the campus of Wooster College.  That was 10 years ago this month and the evening before the book fair brought a heavy band of lake effect snow, so that was kind of neat.  But not long before that a tornado had hit the Wooster campus, and you could see mangled structures from that. So it was a surreal scene walking into the event on a snowy morning with very summery tornado damage as a backdrop.

The population of Wooster is about 25,000 and it, in my mind, is a "gateway town."  Because once you are to Wooster you feel like you've arrived in the more urban, industrial areas of NE Ohio.  Go south of Wooster and you head deep into Ohio's rural Amish country.   Wooster (pronounced Wuhster) is a neat little town if you ever have a chance to go.

Okay, from neat little towns to neat little pies.....Dee (man, my family's Thanksgiving spread was awesome, but it didn't include this pie, if Wooster were closer to me, Dee would have had an unexpected supper guest!) made Vanilla Crumb Pie part of her menu on Thanksgiving Day.  This pie is one of my absolute favorites and Dee's version of it turned out gorgeous.

You can store leftovers in your refrigerator. 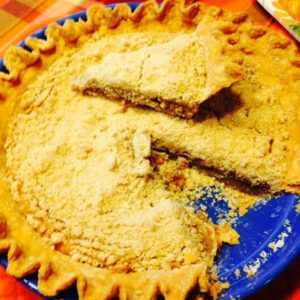 Tried this recipe?Let us know how it was!
« The Amish Cook: Amish Chocolate Pecan Pie
Amish Thanksgiving Vegetable Medley »