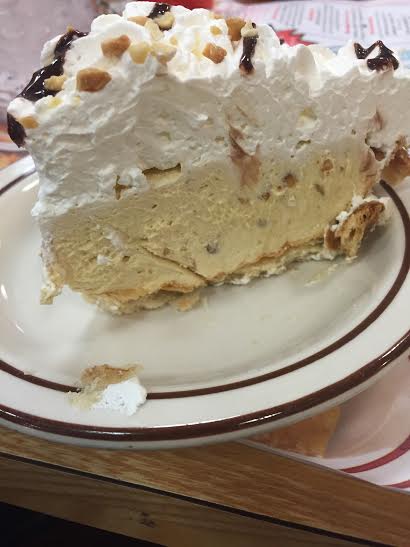 It was a warm February day in Florida. 2008.  I-75 in Florida is a very different interstate than the one that links my hometown to Cincinnati and Dayton some 1000 miles north.  In Florida, the palm-lined interstate is a tropical link to beach-strewn cities and islands, a freeway to paradise of sorts.

On this day, Rachel and I were headed north from the swampy Everglades of south Florida to catch a flight out of Tampa to home.  Our time in paradise was coming to a close We had just gotten engaged and were going home to share the news.  But then I had this inkling that a slice of peanut butter pie from Yoder's Restaurant in Sarasota could be squeezed into the schedule. Just barely.

"Well, if we get off at that exit, hit every traffic light and maybe call in our order ahead we should be able to get back onto I-75, the the Sunshine Skyway and on to Tampa without missing a beat," I declared.

My plan worked perfectly fine but I hadn't factored a massive traffic jam on 275 grinding traffic to a crawl.  But it was almost worth missing a flighty for the smooth, peanut buttery filling from Yoder's peanut butter pie that I was slowly savoring even as I watched the minutes until our flight dwindling precariously.

I'm constantly in search of the perfect peanut butter pie and I doubt I've found it yet.  Well, put it to you this way, I have my favorites.....but is there an elderly Amish lady out there somewhere to put it all together in a perfect union of peanut buttery bliss?  Probably. And I'll find her someday!:)  In the meantime, you have two options for truly awesome peanut butter pie.

I’ve written before about Yoder’s Restaurant Peanut Butter pie in Sarasota, Florida.  The pie is amazing in its creamy consistency and peanutty flavor.  Susan Schlabach’s aunt was the late Amanda Yoder, the founder of the Sarasota restaurant and the one who’s peanut butter pie recipe is so popular.  Susan learned from her Aunt Amanda the recipe so customers of the Home Place are essentially treated to the same pie.  Yuh-Um!

Why is peanut butter pie on my mind today?   Frisch's, a larger diner-style restaurant chain in the Midwest, is featuring peanut butter pie on its menu this month.  It's worth a try. It's not bad. It's even good. Unless you've tried Yoder's. Or the Home Place's.   As I slowly put away the last morsels of my Frisch's peanut pie my mind drifted to that Tampa traffic jam and my peanut butter pie.  We did make the flight. Barely.  Totally worth the harrowing journey for that pie.

Now if you want to try to hand at making your own this is a classic Amish peanut butter pie recipe that tastes very much like what you get at Yoder's. In my notes, it says this IS Yoder's recipe, but I find that hard to believe. I'm not sure where I got it, it's an Amish recipe, but I doubt it is THAT one. 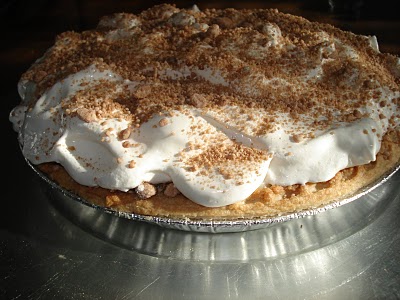 Yoder's Peanut Butter Pie creams the competition. If I had a photo of the Yoder's filling vs. the Frisch's, you'd find a darker, peanuttier filling. Yum.