Updated: Congratulations to my friend Carmon Hacker for taking home Best of Show at the Butler County Fair in Hamilton, Ohio this month. Carmon used a crunch topping for the pie's top crust. Wow, I bet her version of the pie was super! Below is a photo of her prize-winning pie using the Amish365 recipe below!

Not all Amish cooking and baking is full of eggs, butter, and lard. While, traditionally, Amish foods have been pretty fat-laden there is, especially during the summer, an appreciation of fruit-filled desserts and garden salads.

Amish cooking, historically, has had an identity crisis.  On one hand, people think of lard-infused pie crusts, caramel-covered cinnamon rolls, and shoofly as the soul of Amish food.  Yet, on the other,  people think of Amish food as “natural”: free-range chickens, fresh eggs, and beef straight from the cow.  So, which is it?   A bit of both it turns out.

In my over quarter-century studying Amish culinary culture from coast to coast I’ve come away with some take-aways that I’d like to share.

One, Amish cooking in the middle of the 20th century was impacted by pop culture as much as mainstream cooking.  Processed, prepackaged foods found their way into Amish diets.  As Amish culture shifted from being an almost solely agrarian one, fast-food and soda pop entered their culinary lexicon as much as anyone else’s (I've been to some settlements where Amish buggies are full of Mountain Dew cases being hauled back from the supermarket).

In fact, in my experience, few Amish held on to what could be called a “natural diet.”   Canned soups, saltines, Velveeta, and jello became as much a part, or more, of the Amish diet as anyone's.  Over the years readers would, on occasion, ask questions about some of the ingredients in recipes that appeared in this column:  “Why is there cream of mushroom soup, most Amish cooks wouldn’t use that!”  And I’d have to gently correct them and say, “well, actually, yes most Amish would use that ingredient.”    While the Amish strive for separateness, they are influenced by the same food fads and trends that the rest of us are.  Which is why I’ve been pleasantly surprised by so many of Gloria’s recipes being true scratch-made ones that avoid processed, packaged foods.  Gloria’s style of cooking seems to be the leading edge of a larger trend among the Amish.

Over the past decade there has been a definite organic movement among the Amish of Lancaster County and, more recently, Holmes County, Ohio.  This is partly driven by the profit potential in organic farming and partly because of new awareness among the Amish of healthier eating.

Gloria’s mother, Dorcas Raber, really is a woman who I could sit down with and talk to all day about food.  She comes from one of the most populous Amish communities and has passed down a healthier style of cooking to her children, which includes Gloria (who, by the way, wasn’t even two-years-old when I launched The Amish Cook column!)

Dorcas describes the changing food tastes among some Amish:

“There is an awareness more than there used to be about cooking healthier. You hear more about stevia, maple syrup, and sugar substitutes. More people are making the 100 percent whole wheat bread.  There is much more of an awareness of healthier cooking here than their used to be,”  Dorcas says.

Dorcas got her own food traditions with a healthier bent from her mother:

“My Mom is one of those outstanding Amish cooks. When she cooks and when company comes she likes things to look nice. We never had a lot of rich, rich pudding and desserts at home.  ….she isn’t someone who will put chocolate and peanut butter into everything,” Dorcas says, adding that that doesn’t mean her mother doesn’t make some sweet treats (coconut cream pie is a favorite)

Amish cooking is also heavily influenced by local specialties.  For instance,  the Amish in Maine really embrace potatoes and blueberries as part of their menu.  While these are plentiful everywhere, they are considered staples in Maine.   The Amish in Texas have a heavy Tex-Mex influence on their menus.

I think more and more Amish are becoming aware of healthier choices That doesn’t mean cinnamon rolls are gone, but they may be whole wheat ones in the future!

Use your favorite pie crust recipe, there are a lot of good ones on Amish365.com

Refreshing Amish Bumbleberry Pie is a recipe that I’ve seen growing in popularity among the Amish.  It is an example of how fruit pies are displacing sugar-filled specialties like shoo-fly.

Cinnamon Cream Pie - Another refreshing one! 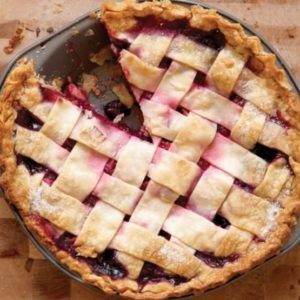