Okay, last week, we had a peek at my Dad’s family reunion. This week we’ll be reliving those following days with Daniel’s family on our trip to PA with a 55-passenger bus.

I smiled at my six dear children bouncing with delight at the thought of traveling seven hours with cousins, aunts, uncles, and grandparents, yet there was a knot I could not undo. It was there, and it was real. How could this be? No Daniel. A bus trip ahead, a night at a motel, eating at a restaurant…. The list stretched on. Oh, Daniel! How I miss you!!

I managed to eat a few bites for lunch. There was nothing wrong with the fantastic stir-fry made by my sister-in-law; it just wasn’t the time for me to eat. Mary ever so kindly asked if there was anything I could eat. Nothing. Well, maybe a few bites of yogurt. Handing me a smoothie drink, I gratefully drank it, feeling my strength coming back.

Then it was time to board. Sitting in the driveway, the bus looked promising for a grand trip.

The children and I found our spots and settled down. As we sped down the gravel road, I blinked back the tears that insisted on coming. I aimed for my children to have a nice time and not to have mom crying, destroying their innocent joy. Experience told me it pays to be real. Thanks to God and tissues, we got through. Thank you, Lord, for bearing our burdens when they are so much more than we could handle.

The miles melted behind us as we headed east. I loved the mountain ranges.

At 9:00, we arrived at the motel safe and sound. I unpacked our bags and got settled in before we went for supper. It was getting relatively late til we were back.

I had sung the last goodnight songs, tucked the last child to bed, and lay there digesting the reality of it all when there was a knock on my door. Jumping out of bed, I found my sister-in-law at the door with an ice-cold shake. “This is for you. I don’t think you got enough to eat for supper.” (In the process of helping the children.) I blinked. I thanked her and headed for the bathroom with it so as not to disturb the children. In the quietness of the bathroom, I enjoyed a refreshing treat, and truth be told, a bit after midnight, when I made my routine round to take the children to the bathroom, I took several more bites before sliding it back into the freezer!

At 6:00 a.m. the following day, a friend who lived only an hour away came to meet me in our room. We laughed, and we cried. She had been our neighbor those first years after Daniel and I were married; now, spending time together was refreshing.

By 9:00 a.m., everything was packed up, and we were on our way. The children couldn’t wait to see Uncle David. Twenty minutes later, as we drove into their winding driveway, we craned our necks. There he was- there was David amid his many new friends who he got acquainted with the last 14 months during his stay. As the bus door opened, nieces and nephews poured out, running to give hugs to their special uncle. As I met David, my dam broke. Somehow seeing him here, minus Daniel, and knowing how much Daniel loved David, who was a couple of years younger than himself, just touched a deep, deep chord within.

The next several hours were spent touring the facility, which worked with young boys across the states. This had been Daniel’s heart. How he had a passion for helping young boys, and his heart beat for their peace and freedom!

A farewell ceremony was held with many memories shared of David, his favorite songs, and such. I was touched as we sang, “Channels only, blessed Master...” Yes, may I be a channel, no matter how much it hurts and how raw I feel?

Lunch was served by the cooks there. The chicken and rice stacks were topped off with cookies, fresh fruits, caramelized pecans, and upon David’s request, his sister Mary’s specialty, Mint Ginger Spritzer. Now, this was a smashing success. Each glass was graced with individual sprigs of tea and lime slices. The mint, ginger, and lime flavors blended perfectly. Mmm... I do see why David requested Mary bring all those ingredients and make it for the event.

Just before we left, I discovered there was a young boy there who lost his father when he was young. I was honored to talk with him and ask questions, which he kindly answered. Though it was 12 years since his beloved father passed, I could see the tenderness and warmth of a heart turned toward the Lord, which experienced healing through it.

The following seven hours were spent together as a family as we traveled toward Ohio. There are no words to thank the Yoder family enough for still counting us as family, even with the absence of Daniel.

The next day we traveled home to IL. How good yet empty it felt to come back home! Be sure to give Mary’s spritzer a try- you will love it!

Refreshing Mint-Ginger Summer Spritzer is definitely a summer wonder of a beverage. If you are like me and you really don't like ginger, or mint, this drink sounds like something you'd stay as far away from as possible. But it's easy to make and even easier to drink. Geez, even my picky kids liked it.

I just peeled the ginger and sliced it like I would a potato. The recipe said peel and slice, it didn't say how thin the slices should be....just said 3 tablespoons, so I think what I did worked.

At this point you're just simmering or low boiling sugar, ginger, and mint leaves for about 5 minutes and then you let it sit for an hour. So nothing difficult about that.

I just bought some of this stuff for the sparkling white grape juice. Nothing fancy.

And, yeah, this really is good. Fill up a mason jar or a glass with a LOT of ice and then dump the drink in, stir in some of the ginger-sugar mixture, and you're good to go!

Even my picky kids liked this refreshing mint-ginger summer spritzer, and that is saying something! 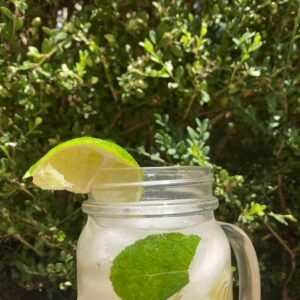 Tried this recipe?Let us know how it was!
« Amish Washday Casserole
Carmon's Best-of-Show Applesauce Cake »