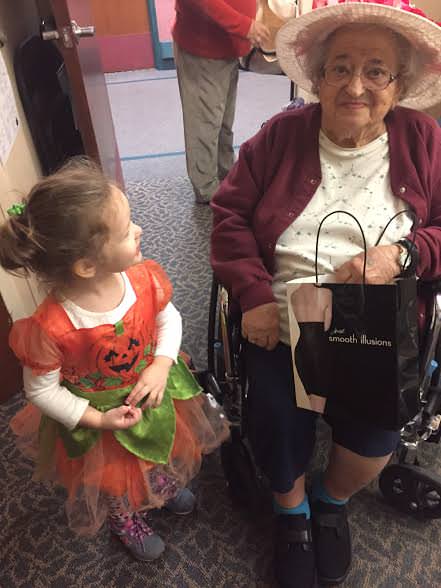 Aster and Grandma dressed up for Halloween this year

My Grandma was a woman that defied a set label.  She was as American in some ways as the apple pie she so expertly made, yet in other ways as Italian as the vineyards and olives of the Calabrian countryside.   Like many first generation offspring of immigrants, you could sense a palpable pull in her between her heritage and future.  In my Mom’s family, she was the matriarch of the first generation born on USA soil, but she felt the pull of Italy and the embrace of America simultaneously and you could always feel the tug of those dual identities.    There was as likely to be a heaping bowl of spaghetti and homemade meatballs on her table as there was a frozen Swanson TV dinner, or handmade, homemade pizzelles on a plate, alongside  Little Debbie lunch-cakes. (By the way, her "secret" for homemade meatballs was lots of cheese and breadcrumbs)

Grandma’s life wasn’t easy, but she never lost a streak of child-like wonder. She could find the good in the worst creatures among us.  And she spread her good worldwide when we moved overseas. We could count on a letter from Grandma almost every week, letters that informed us of the bland, but comforting, happenings of home: a new restaurant in town, an Aunt’s gout, a favorite recipe.  And when I started my newspaper career, she clipped every article I ever wrote and put them in a folder, enamored by the sight of my name in print.

Grandma Mary worked a variety of jobs throughout her life, but I most remember her as a hospital cook in my hometown.   When my elementary school class was collecting Campbell’s Soup labels for a fund-raising project, my grandma was our class’s secret ace, as she tore off the labels of endless soup cans in the hospital kitchen and I’d deliver them to my class by the sack full.  And the class across the hall would look at us with astonished envy.

Her days spent in a hospital kitchen perfecting soups and simmering sauces made her a fierce food critic.  My mother would often be on the receiving end of her “velvet glove critiques.”    Recently when trying some of my Mom’s pumpkin pie, she remarked “It’s different” (you had to know the code, “okay” meant she didn’t like it, “different” meant she really didn’t like it).

Grandma loved wholesome shows like Little House on the Prairie, Murder, She Wrote, and who remembers Father Dowling Mysteries?  She was a faithful follower of the Catholic church, yet harbored a live and let live progressive streak that was almost ahead of its time.

But I most remember her for simply being there.  She wasn’t one to heap on a lot of advice or criticism or deep life lessons. To grandma there wasn't really any problem that a warm bowl of chili or a cold Oreo couldn't soothe. No, she gave me something far more valuable than advice and life lessons: her time.  She always had time for her children and her grandchildren. And now she is out of what I loved the most.  I'll miss her more than any words I can say here, but I'll never forget her and try to remember to pass on the simple gift of time to the next generation.