The recipe for Super Ham and Spaghetti Bake comes from a very local cookbook published in the Amish settlement of Plain City, Ohio.  Ham and spaghetti?  It's a different combination but  I mean, I guess it isn't a huge stretch.  People often make meatballs out of sausage and pair it with spaghetti, and ham comes from the same animal.

Pork is prized among the Amish.  Hog-butchering day is usually sometime in later winter when the messy job can still be done during cold weather.  Everything but the squeal is usually used, right down to the bones, head meat, sausages, and, ham is a favorite.   If an Amish family can get enough ham out of the hog then the meat is enjoyed and used year-round.

Ham is a favorite in casseroles like this Super Ham and Spaghetti Bake or sliced and served on sandwiches.  Store-bought sliced ham is good, but nothing like the real deal ham that can be procured fresh from the pig.

My Dad is a pretty tough critic on food, but he really really liked this one.  So take a look at the photos and recipe below and enjoy!

It starts with basic spaghetti!

My grandma always added some olive oil and salt to the water...if that worked for her, then it works for me.

Lots of good flavors come together in this one...

Here is the Spaghetti & ham bake all assembled and ready to put in the oven. Only took about 10 minutes from start to oven time!

Out of the oven after the cheese is melted...

Onto the plate, as an aside, my Dad loves Crush...not my favorite drink. And this is how my parents manage their weight better than I do....My plate would be piled with this supper, whereas their portions are much more manageable....Even if they have seconds, it is a small seconds, I'd pile my plate high once sand then do it again...

Are the Amish allowed to eat pork?

Unlike other religious traditions, the Amish love their pork! 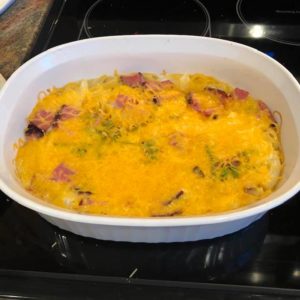