Last week we had zucchini patties on the table; this week, we'll be enjoying vine-ripened tomatoes. Now I hope you can bear with me. Still, when I talk about vine-ripened tomatoes, I'm not referring to the plastic-tasting ones from a grocery store- you know, the ones that were picked green then gassed along the way to portray a pretty red color. Okay, those may be better than nothing, but for today vine-ripened tomatoes will be the discussion.

Now I know some folks don't like a tomato, not even one straight from the patch. I confess I cannot wrap my brain around that, but that's fine it takes all sorts of flavors to make the world go around.

So, I know there are more different ways to use tomatoes than can be discussed right now, but we'll cover a few favorites. I do enjoy home-canned goods like salsa, pizza sauce, marinara, barbecue sauce, or ketchup, but then there is nothing like a fresh tomato slice on top of any kind of sandwich you choose. I enjoy tomato salsa, but if I'm super honest, the biggest kick I get out of it is probably thinking of mom and how she enjoys it. I doubt if I'll ever take a bite of fresh tomato salsa without thinking about her. She has always been a fan of any salsa and excels in serving it to guests or taking it to gatherings. On a side note, I well remember the day 25 years ago, sitting next to mom at the kitchen table as we snacked on saltine crackers with a dab of mayo and canned peppers. Mom was completely impressed with her six-year-old daughter, who enjoyed the tangy treat with her. So pleased was I with Mom so proud about it that I ate cracker after cracker with these peppers that I technically really didn't even care for! Years later, I told her the other half of the story, of which she graciously took astride, knowing that we were both happy.

Another dimension of tomatoes is casseroles and tomato pies. I was impressed with this particular recipe shared by my sister-in-law 10 years ago. The combination of a biscuit crust and tomato slices set it apart from any ordinary dish.

This spring, we were surprised when a column reader, Ivy, from West Union, Ohio, sent tomato seeds for us to try. These heirloom varieties, Mortgage Lifter, sparked our interest; now, in a couple of weeks, we'll know what they'll taste like. The children, who also love tomatoes, were impressed to watch them sprout and grow. They are now in the garden growing by leaps and bounds under these sunny skies and ample rainfall. Julia and Austin have been helping me keep them suckered and staked. To those of you who have raised tomatoes, I wish there could be a show of hands on whether or not you suckered them, and what your success rates were with raising big plump fruits (yes, tomatoes are fruits, not veggies, as they are generally classified).

Well, in their garden at home, prior to our marriage, Daniel was not used to pinching off the growth, which we identified as suckers. I had helped sucker tomato plants for as long as I could remember, including our years of raising produce. It can be quite interesting to merge two ideas and see what comes out of it (and in more ways than gardening!). At any rate this year, Daniel was the one to suggest that we not only take off the suckers but also the bottom leaves, like stripping the entire plant, the bottom 12 inches! They do look a bit funny, but I believe that the stalk will have ample energy to go in the fruit and not only in a nice bushy plant! We'll see.

You'd be forgiven for thinking the pictures below were of a deep-dish Chicago-style pizza, but looks are deceiving. The crust is something much more pastry-like, so it's more a pie than a pizza. You'll just have to try the recipe yourself to see what you think!

The bacon gives this tomato pie some meaty flavor. We're used to bacon in the neat little slices found in the supermarket, but a lot of times the "Amish bacon" is the slab type bacon, more common in home-butchering.

Tomatoes, onions, and other veggies team up with the bacon to give this homemade summer tomato pie some heft!

The crust is a refreshing mish-mash of ingredients that gives this pie its unique texture and taste.

This is the filling for the tomato pie.

It comes out of the oven looking a lot like a pizza! 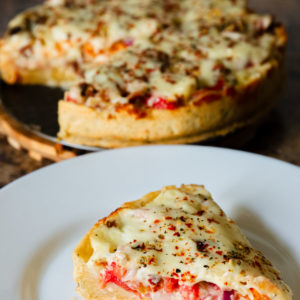