THE AMISH COOK
BY GLORIA YODER
Repeatedly we hear from you readers whose favorite topic is the one I enjoy writing about the most (that is next to writing about hubby, of course). So this week I'll plunge into the topic of our rapidly growing children.
This time will start with little Elijah, who is 19 months old. He has brought more smiles to our hearts and faces than we could ever tell. Why he bubbles with grins; the best is when one of the other children wake from a nap he'll come over to them with his mouth wide open crooning over them with the biggest smile that could fit onto his face rimmed with auburn brown curls. Everyone loves snuggling with him. His all time favorite is playing with balls. He is complete with a ball in each hand or a bat in one and a ball in the other. I'm eager to watch his skills develop as he keeps growing. 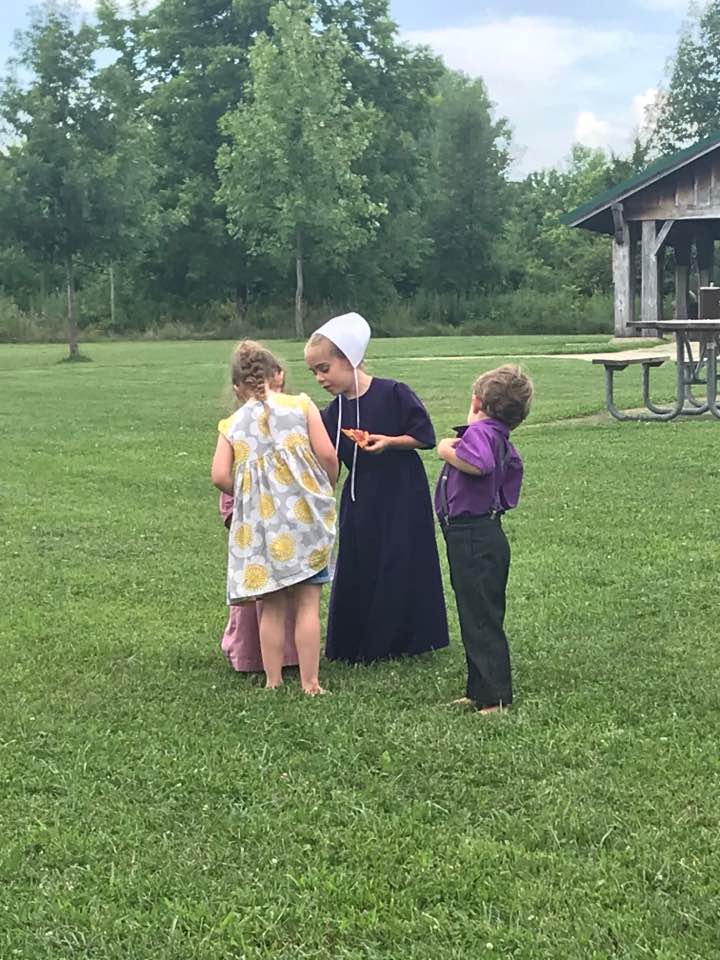 Next is blonde Jesse, who is almost two years old. He too has added untold spice to our family. His strong personality and 'talking' blue eyes don't leave you guessing on how he's doing. He is getting to be a little chatterbox. Recently after saying something, he passingly remarked, "Kidding!" Obviously, his ears were picking up older sibling talk. He thrives on anything with the great outdoors, motors, or heights. He goes outside every chance he gets, begs for tractor and forklift rides, and after dark, he watches the moon declaring that he wants to go up to it. He loves climbing- the higher, the better. Recently we had the fun of climbing a 90-foot tower that was child-friendly. Jesse was in awe.
Three-year-old Rayni is the next in line. As you know, we are currently fostering her and Jesse. A special thanks to all of you readers who have sent cards and letters, As I mentioned a few weeks ago, we were told that the adoption will be finalized by now. We were devastated by the news that among a stack of paperwork, a statement was discovered that had been missed and indicated that there might be Apache relatives out there. Now an IQWA search first needs to be submitted to the Apache Indian tribe in case there would be a match with an Apache relative wanting rights. It's all part of a law that was passed years ago to protect tribal rights. This law still stands today. I don't have a thing against Native Americans; it's just been a disappointment to have things prolonged.

I admit that I've felt a bit like we've been left dangling from a string, not knowing for sure how things will turn out. As you know, peace comes only when freely forgiving and trusting God to hold all things in the palm of His hand. It's been a battle, but it's also been a blessing to know that the Lord in the midst of it. Thanks again for your support, you've been amazing. In the meanwhile, we keep loving them as our own. Rayni loves playing with dolls; hearing her sing to them is priceless. She's like a sponge that soaks up all that is planted in her. She also helps our family memorize Bible verses. It is touching for me to listen to her praying. She often prays for all the poor little children. Bless her heart; she doesn't have any clue what her life used to be like.

Active Austin comes next. At four years old he is quite the little man. In spite of his rambunctious boyish ways, he is developing into a wonderful and gentle big brother for his younger siblings. Julia's example of calm, motherly ways with the little ones has been positive for him. He thrives on his morning chores; it certainly was worth the efforts of training and getting him into predictable routines. After breakfast, he takes responsibility of getting dressed, brushing his teeth, and combing his hair. Next, he clears the table then heads outdoors where he feeds the five chickens and gathers eggs. Going outside to do his chores makes him feel like a man. On occasions like today, he collected enough eggs that he had an extra dozen to sell. The money then lands in a jar which we call our family fund (along with what we get for selling milk). Once we have enough money in the fund, we want to use it to go on a trip as a family.

Last week I discovered that Austin never even noticed that Rayni's biracial skin is darker than the rest of us. Wow, I was impressed. Isn't it beautiful how true love is color blind?
Julia just had her eighth birthday, which she thoroughly enjoyed. Thanks to Wyla from Wilmington Ohio who sent her a cross-stitching set. She now enjoys spending her free time cross-stitching. She's also getting started with roller skating and loves it. With the durable flooring we have she even gets to wear them in the house. Now she discovered how much fun it is to wear them to wash the supper dishes, which is her routine after dinner job. It brings her up to just the right height, now she doesn't need to use a step stool anymore and of course, makes dishes so much more pleasant to do! Homeschooling is going well for her; each week, we seem to be getting a little more into a rhythm. We converted our sewing room into a little classroom which works quite well. Most of her school work is done in the forenoon. I've been amazed at how well things are coming together; at first, I didn't know how it'll all work out to home school her alongside our four preschoolers. I can't say that we haven't had any rough spots with trying to juggle everybody all at once, but it certainly has been a blessing that I wouldn't change if I could. It also gives the other children an incentive and desire to learn. In the afternoon I like having some class time with all the children. I set them in a row on a bench then we have flashcards with shapes, numbers, colors and such. The older ones are then an asset in teaching the younger ones as they help chant the answers.
Our family's latest smoothie crush is these unforgettable mocha shakes. You can multiply the recipe to fit the number of folks you're serving.