BY GLORIA YODER
Hello to all!
Early this past Wednesday morning things began stirring in our Amish community. Each year we as a church gather for a hog-butchering. Yes, it’s a major undertaking , yet well worth it, as it supplies us with meat for much of the year. Everyone has items to bring along. Some furnish stuffers, grinders and tables while others bring more basic items such as butcher aprons, knives, larger containers and totes as well as spices and seasoning mixes for stuffed sausage, bologna or breakfast sausage. Throughout the day everything gets mixed together, therefore marking your items is a must (Like my Mom used to say: “Everything gets marked but my children!”) 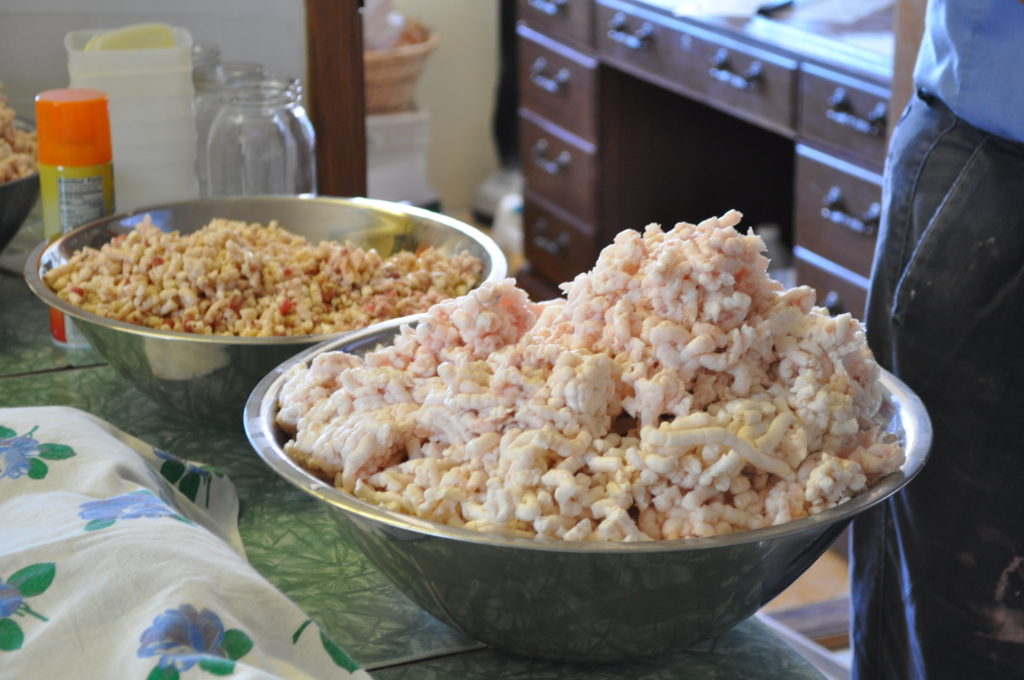 Ground pork and venison are the basis for Gloria's Deer Sausage recipe. This is sound ground pork being worked up at an Amish home I visited in Kansas recently - Kevin Williams photo

There’s something special about joining friends, working together and accomplishing a lot in a short time. A day like this also requires a lot of planning and organizing. The men take turns coordinating it. This year was my husband Daniel’s turn. He enjoys challenges as such and, of course, I think he did a wonderful job!
This year there were 23 hogs to butcher. Quite a bit of venison was also brought in to be mixed with pork and used for bologna, sausage, etc. This year Daniel and I made several batches of deer sausage. We were pleased with how well it turned out.
On Tuesday before the butchering , the men, boys, and some of the girls got a head start by dressing the pigs and getting bologna ready for the smoker early the next morning.
Wednesday proved to be a beautiful day for butchering: not frigidly cold nor too warm for all the meat.
I’ll give you a little outline of the day. After working several hours everyone takes a break while one of the men shares a brief devotional and leads in prayer. Next a warm breakfast is served. Several ladies had prepared delicious breakfast casseroles that were layered up with potatoes, scrambled eggs, sausage gravy, and cheese sauce. We also had apple sauce, baked goods, and yogurt.
Soon everyone resumes back to their jobs again. A lot of us have the same jobs from year to year. For example, while 15-20 people work on de-boning, several are grinding. A few ladies are taking charge of mixing the different seasonings for the pork and venison. Several people are stuffing sausage and bologna while others put it on racks to be placed in the smoker. A few experienced men and boys run the smoker. After it has been removed from the smoker a couple people are responsible for quickly cooling it down. The list of tasks goes on One of my favorite parts is what’s happening outdoors: a huge kettle is placed over a fire where the pig fat is cooked before being put through a press to be turned into cracklings and lard. Once the kettle has been emptied the water is dumped into it along with bones that have been trimmed off. After it has cooked, until the meat is tender, the school children are summoned around a table where they help one another pick the leftover bits of pork off the bones. This is then used for “pan pudding” and liverwurst. Are you familiar with it? If not, ask your grandma, she’ll probably remember making it! It is an old-fashioned favorite.
How about trying our deer sausage recipe? I made several changes to the original recipe to suit our taste buds. These seasonings can also be added to 25 pounds of pork.
If this recipe is too large for you, you may cut it in half. This is delicious browned and used in casseroles, gravy or any recipe that calls for sausage or venison. We love forming this deer sausage into patties, rolling them in flour and browning them. Daniel especially likes eating the with pancakes or waffles.