What an eventful day! Mom invited  my two sister-in-laws and myself to her house for the day. Plans were to bake pies and do whatever other projects we wanted to bring along. Pies sounded like an impressive option to me,
especially since I just don't find as much time to work in the kitchen as I used to. But then, that's okay, Daniel doesn't expect me to reach around to everything I would like to do.

Mom had plans of making five pies to send to the food pantry in a near-by town, it only seemed like the practical thing to do to join her, furnishing some ingredients rather than just make a mega amount of pies. One of
Daniel's favorites, which was also served at our wedding is peanut butter pie. In fact, it's a "Flat Rock favorite", our community is known to be especially fond of peanut butter pie. My personal preference is adding some
banana slices for an added flavor and of course I'm always looking for ways to incorporate healthier foods into our diets. 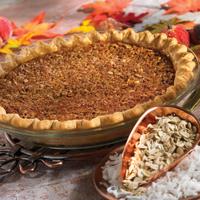 This is a picture of Coconut Oatmeal Pie from the Karo website. Karo corn syrup is one of the ingredients that can be used in this pie, although Gloria uses maple syrup instead.

we mixed up the dough I tried to recall all the tips my mother-in-law had given me some time ago: don't over mix the dough, instead mix like a bowl of feathers or, don't make crumbs too wet. Soon I started rolling out

the crusts, once more I was  blessed with countless motherhood duties. There were dirty diapers that needed to be taken care of, little tummies to be filled, squabbles to settle, and  "love tanks" that needed to be
replenished. I hadn't realized how fast the pie dough dries out if not  covered. So after my return I added some more of my egg mixture, resulting in a stiffer dough. Oh well, it just won't all be grade A, I decided,
that's just a part of being a mom. Of course my mom was there to help me with whatever she could as she also worked on making a delicious lunch for all of us.

My high hopes of having pie ready for lunch was fast diminishing. I apologetically told Daniel at noon that we weren't just baking pie, we were primarily taking care of little ones and the pie simply wasn't ready yet!
Of course he told me it was just fine, he would never want me to neglect the children for anything earthly.
After lunch, while the three youngest children slept, I cooked several batches of filling for the peanut butter pies while Mom made coconut oatmeal and several fruit filling pies. Dear little Jesse had a bit of a
rough afternoon as I spent extra time holding him, seemingly his vaccination shots from the day before were bothering him.
By breaktime at the shop where Daniel was working I once more apologetically told him that the pies simply weren't ready yet, to which he once more kindly assured me that it was quite alright.   After the dozen pies had been made I did feel like quite something had been accomplished, even more so than if everything had gone smoothly. As I
looked over them the coconut oatmeal got my attention the most. They taste  almost like pecan pie but then you don't have the expense of buying pecans.
Matter of fact this recipe is just like our family favorite pecan pie with
coconut and oatmeal used instead!

Preheat oven to 320.  Mix everything in a bowl until well blended.  Pour into an unbaked pie crust of your choice and bake for one hour.