I was working in the kitchen, making lunch when I realized our supply of home-canned chicken was almost all gone.

On homeschooling days I always go for simple menus for lunch. Canned pinto or black beans with onions and chicken have been a hit at our house ever since a friend shared some of hers with us several years ago. Thinking how I’ll miss not having chicken and beans to serve alongside butternut squash or a tossed salad I told God how much I’d enjoy having chicken to can with beans. Since we hadn’t raised our own broilers this year and I didn’t care for the thought of buying hormone injected meat, I wasn’t sure where to find some. Time and again when I thought about it, I just told God that in His time we’d like to have some chicken for the family.

When my mother-in-law from Ohio visiting was here, I told her about it and said I’m eager to see what God will provide.

A few months later a family in church notified us that they’re needing to replace their laying chickens and were wondering if anyone in the community would be interested in getting their hens since they have a new batch coming in.

My heart skipped a beat. Is God really providing in such a simple way? The Waglers insisted that they are more than happy to just pass them on to anyone who would be willing to come and pick them up that very afternoon.

I explained to the children how God has answered and gave us this chicken. “We need to give them a thank you card.” declared Hosanna. “Yes, you are right, we want to,” I agreed.

We now just needed the perfect day to butcher chickens. It so happened that my in-laws from Ohio came for a visit the following week. “Dad could help us butcher chickens,” Daniel suggested.

As they arrived at our house  we told them about the projected plans of butchering.  “Last time you were here I told you how I’m praying for chicken, now this time you’re here we are butchering them!” I told my mother-in-law.

We made plans to start butchering at 3:00 when Daniel gets off work in the shop. The children and I were eagerly waiting, with their help we had large containers filled with cold water to rinse and cool the chicken. Daniel hung several twines in the barn for butchering, just like my dad always did.

As we butchered those first chickens I couldn’t resist telling Daniel’s parents how I link special memories to a job as yucky as butchering chickens or turkeys. I told them of the times Dad and I would butcher cull turkeys at our turkey farm a mile down the road.

Being the second to oldest in a family of seven children these rare times of having Dad all to myself was a treat even at 19 years old. On these occasions, Dad and I would discuss my special friend Daniel and our upcoming wedding. I glowed with joy as we discussed aspects of developing relations in a Godly way. Both Dad and Mom were my safe place. I would never have developed any friendship with a boy without their complete blessing.

With our wedding day coming up I was elated to soon belong to my beloved fiance. I knew it would be a lifelong commitment no matter what. Now I look back, my heart warms, then I chuckle. Surely it was a precious stage, yet I had no idea what curve balls would be tossed at us in the next 11 years. But then, that’s okay, I’m glad I don’t know what the next 11 years will hold, but I do know exactly Who holds them, so with a renewed love for the Lord we keep journeying hand in hand.

Stay in tune for more on weddings in the weeks ahead. I have a sister, a cousin, and several friends getting married this fall and next spring, one of which will Lord willing be hosted in our shop. I can’t wait to fill you in on it all.

In the meanwhile try our Eclair Dessert which was served on Sunday noon after church. My sister-in-law introduced it to us as a specialty from Allen County IN, the large Amish community she was raised in. She is famous for this yummy dessert.

Editor's Notes and Comments About The Recipe

This is an easy recipe, but it caused me all sorts of problems, mainly self-inflicted wounds. First of all, on the crust, I was rushed and distracted and, well, you need to stir it very well. You need to stir everything well well so the flour gets dissolved completely. There can be some clumps that if you don't take care of while they are in the pan, could come back to haunt you later. Also, the recipe says to put it into a 13 X 18-inch pan but I could not get that to work. I had to downsize to a 10 X 13, it just wasn't enough crust for me. So keep a back-up handy if 13 X 18 is too big.

This crust doesn't look like any great shakes for this Amish Eclair Dessert, but, yeah, this is what it looked like coming out of the oven.

SIGH, this is another self-inflicted wound. The filling... Just put it all in a bowl and beat, do NOT do what I did and put it all in a saucepan and start to cook it.....Okay, well, bottom line, this is how it turned out. It really needs to cool for quite a while so I have not tasted this yet, but, in the end, it looks good, smells good, the crust tastes like an eclair. I chose to use apple pie filling but, man, chocolate would pair well with it as Gloria suggests. So, yeah, give this one a try!

Aster took the photo below of the Amish Eclair Dessert, she did a nice job of capturing it.

The recipe for this easy dessert is below. It wasn't easy for me, but follow the instructions and won't "wing it" like I did and you'll be fine for the Amish Eclair Dessert. For the topping, use a can of your favorite fruit pie filling, chill, and serve, or spread with chocolate pudding chill and serve, THAT would be amazing! 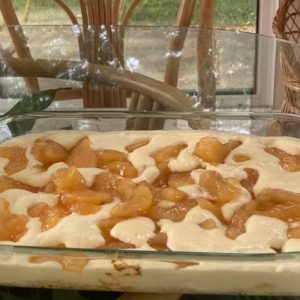