Perhaps your local grocery is all out of Butterballs, or you just want to save some money at your Thanksgiving table. If you are not having a big gathering and you don't feel like shelling out big bucks for a bird, perhaps you could try a "mock turkey." This is where Emma Miller's Amish Mock Turkey comes in. I mean, with this you won't have cold turkey leftovers, but it is still good.

By the way, "mock" recipes are popular among the Amish. Why? Because, historically, they've been a very isolated people (not so much anymore), so cooking was very much based on what you had on hand. So there are more mock recipes below. For instance, lemons were often in short supply in Amish communities yet lemon pie is still popular. So some creative cook came up with "vinegar pie" which really is a mock lemon pie.

I remember when I was a child, my Dad would love opening up a can of "mock turtle soup" for us. I think it's a Cincinnati thing.

This recipe comes to us from an Amish woman in Montana, it's a loaf-type concoction that's made of some soup, ground beef, and bread and it firms up. Thanks to Jessica for making it for us last-minute last night.

It does resemble a mock turkey in look and taste (meaning not a ton of flavor, turkey usually doesn't, which is why ladling some gravy over this would probably be super)

A few observations from Jessica about Amish Mock Turkey. You might want to use a thicker bread, perhaps a broken loaf of artesian bread to better soak up the liquid as it bakes, because there isn't really much instruction on whether to drain the hamburger or not. I'm inclined to say don't drain (since it is telling us to brown the hamburger in butter). Jessica split the difference and partially drained and that seemed to work OK.

We used fresh hamburger from Aldi, but Amish cooks would have their own home-butchered beef to use.

Use a loaf of bread like this or, perhaps, something tougher and crustier like an artesian bread loaf.

Hamburger is the mock turkey. Granted beef prices aren't any picnic either this year, still, it's easier on the bank account than a whole turkey.

Besides salt and black pepper, this recipe doesn't have much seasoning. You can garnish it up even more by add fresh herbs to the mixture like sage or thyme. Or add a teaspoon garlic powder. Some people like to add rice, which is a nice addition. Or chop a tomato, Fresh breadcrumbs is also a nice texture. Or just crumb bread from the loaf you are using. Mushrooms and chopped up celery or chickpeas ( add some protein!) could all be added into this. It's not a vegan dish, but I am sure you could find ways to do that. Some people also chop up and throw in some apples with the rest of the ingredients but, again, not my favorite option. I really like the recipe just the way it is.

The mock turkey pairs well with a fresh vegetable like green beans and maybe make some gravy to spoon over the "turkey", which kind of slices like a loaf. Some people add cheese to this, but I don't think that works so well with the other flavors. Still, anything is your call with this.

You could even slice this up and make an old fashioned sandwich, but there is so much bread in the actual mock turkey, I'm not sure eating more bread with it makes al ot of sense. Now, let's check out the recipe!

Nothing like a good imposter recipe, the Amish are great and concocting some!

You'd never know these are not real! 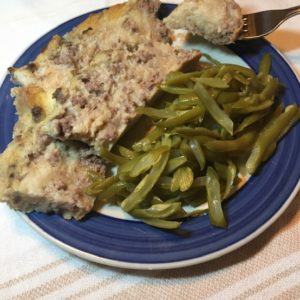