I asked Geoff how he made his stew:

"The beef stew was just something I threw together – a Campbell’s (I think) crockpot sauce mix, some beef, onions and mushrooms. I had it in the crockpot for eight hours. Then I added noodles to it," he said.

And his daughter was actually impressed, at least by how it looked. 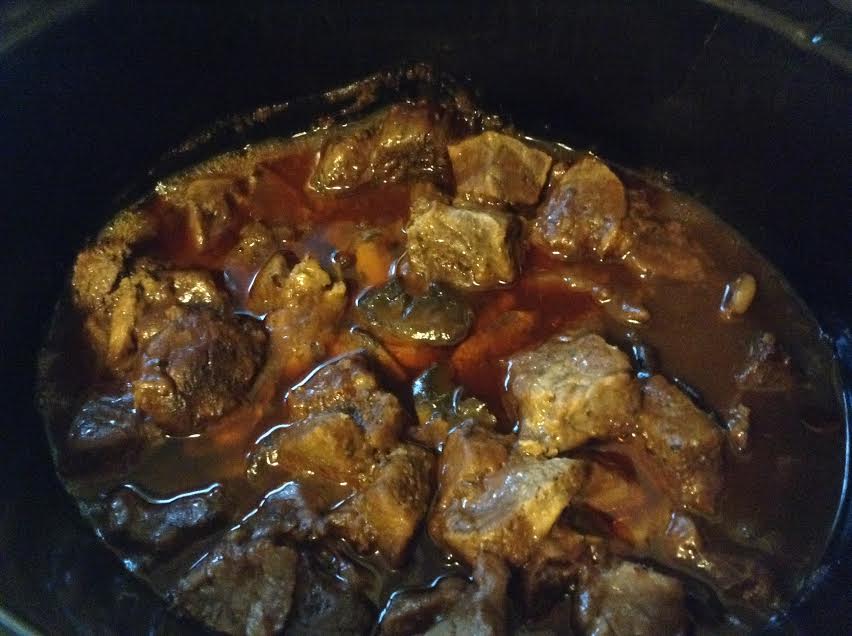 My brother's slow-cooker stew...what do you think? Appealing looking or not? Could use a bit more color, I think, more carrots swimming around in there and something....

“It actually looks good,” Lorelei, who just entered eighth grade, said.  But Geoff said the accolades stopped after tasting it.

Geoff chalked up the subpar stew to subpar cooking skills.

"A real cook, I’m sure, with the right seasonings, could have turned it into something special. But I lack the cooking gene," Geoff said.

Still, give him an A for effort and if anyone has any easy crock-pot stew recipes, post them and I'll pass them along to him!

Meanwhile, lets look at some Amish stew recipes, the first recipe comes from the Amish community of Aylmer, Ontario.

Print
Serves: serves 6 to 8
Ingredients
Instructions
Wordpress Recipe Plugin by EasyRecipe
3.5.3226
This baked beef stew is another recipe from Aylmer, Ontario. Now keep in mind that the meat most Amish cooks would use would be the freshest imaginable, directly from their home-butchered steer.  So there's going to be a lot of taste variation in these recipes depending on where you source your beef.

Print
Ingredients
Instructions
Wordpress Recipe Plugin by EasyRecipe
3.5.3226
This is sort of a American chop suey meets stew recipe found in some Amish kitchens. This was not written in the typical recipe format, more a set of instructions, so here goes:

Take a roast or stew meat, cut into chunks. Trim off fat and cut some potatoes into cubes.  Carrots and onions and any vegetables you like, take according to size of your family, and add the the meat and potatoes.  Then take 1 can cream of celery soup, ½ soup can of water, 1 can cream of chicken soup, 1 /2 soup can of water and pour over the meat and vegetables. Do not mix.  Bake five hours at 275.