Do you know the feeling of just going through your house, emptying closets, cleaning out drawers, then wondering how you ever ended up with markers in a clothes drawer or a butter knife in the bathroom? Things get mysteriously shuffled at our house. Even putting that aside there’s always a need of sorting through another drawer, getting rid of unneeded items or getting out bigger sizes for our growing children.

Last week we did coats, this week I have baskets full of socks staring at me. The 12 little feet have grown since last spring. And by the way, what happens to stray socks? You’d think there would be a sock- eater around here. One year-old Joshua gets blamed for throwing things in the waste basket (just yesterday I found some of Elijah’s treasures in the trash again), but then I hear that even folks with no youngsters have socks disappearing. Oh well, so goes.

Beside ransacking through the closets and storage, I’ve been going through my kitchen cupboards.

When Owen, my cousin who lives in a cute little camper on our property, came home from a mission trip to Bolivia and described the Bolivian homes and their simplicity. It was then and there that I decided, “This is enough.” I whispered a prayer for wisdom and grabbed a tote. That very night I went through every drawer and cupboard in the kitchen, evaluating every stack of plates, serving bowls, glasses, and placed all the items I have not regularly used in the last months into the tote or the pantry. Who ever uses four teaspoon measures or six scrapers all at once?

Talking about having fun in the kitchen! Do you know what I mean when I say that empty feels clean? That’s exactly how it felt. You should have been here to see my husband’s eyes when I opened the utensil drawer (which had been so full you could hardly open it all the way). His face looked incredulous when he saw the two scrapers and whisks, one spatula, ice pick, and a lone spoon, “What ever did you do with everything?” he asked.

Chuckling I told him of the items I placed in the pantry in case I need them and of the tote which was fast filling up would go to the garage on trial.

Julia and Austin, who are my kitchen helpers, were impressed with the idea. They agree that it is easier to put dishes away with the cupboards less full.

Now this brings me to a heart warming note from Ms. Mary, a reader from Wilkes Barre PA, who inquired whether us Amish folks use electrical appliances and if perhaps she’s doing it the Amish way by using less modern conveniences. Thanks for asking Mary. Yes, you are correct, Amish do live simpler in many or most ways. Like anything else, when comparing the Amish across the globe, they drastically vary.

I personally like using spoons and basic whisks to mix up our Sunday pancakes or our family favorite chocolate cake. In my kitchen, I do not have a hand-held electric beater. I whip up my egg whites with an old fashioned hand beater. I do have a mixer, powered by our inverter and solar system which I use for bread- though I tell my children that I want them to learn to knead it by hand like I did when I was a girl!

While we do not view these modern conveniences as wrong, we opt for a more simple life-style, giving a quieter or more laid back slant to life as a whole. For me one of the primary reasons I value the theory of less technology and social media, is that the more I have going around me, the harder it is for me to be at rest before God and listen to his voice and leading. I cherish the times of quietness in His presence and don’t want anything cluttering my life and putting quiet times in jeopardy.

Anyway, yes I value our Amish heritage, but you certainly don’t need to be Amish to spend eternity in the very presence of God!

An old Amish tradition from Owen’s family is chunky apple sauce. My grandma used to make it, before she passed. Now when Owen tossed out the idea of making chunky apple sauce I asked our neighbor for basic instructions on how she makes hers, which is served hot or cold. After making it the first time few years ago, we were hooked. It is like eating a dessert, but you’re actually eating an apple instead!

Since our apple trees are not mature enough to be producing apples, we’re buying ours this year. Much to the children’s delight, our first two bushels of fresh apples were delivered this week from an orchard in Michigan. The remaining seven bushels (yes, that’s right) will come in a couple weeks from now. Stay tuned for apple updates, and in the meanwhile enjoy our Chunky Cinnamon Applesauce Recipe!

Editor's Notes and Comments on Recipe

For some reason, the thought of making homemade applesauce was intimidating me. I had never done it before. So, yesterday, the girls and I went to a nearby apple orchard to get some apples.

Here are my girls clowning around in the pumpkin patch. The apple orchard was at the same place. I wanted to get honeycrisp, but they were sold out of those. So, I bought what they said was the next sweetest apple - Golden Delicious. But my oldest daughter wanted Granny Smith (ugh, too tart for me), so I got some of those too. Gloria said any kind of apple could be used for this recipe.

Here is some of our haul of apples. But Gloria's Chunky Cinnamon Applesauce Recipe is super easy. It's pretty much just cooked apples. Here recipe calls for 12 apples which, I thought, erroneously, might be too much. Well, I wanted to save some of the delicious orchard apples for snacking, I didn't want to use them all. I probably should have used more Granny Smith in the applesauce but was worried I'd have to smother it with sugar to get my girls to eat it. So I settled on halving the recipe, using six apples, 5 Golden Delicious, and 1 Granny Smith. Here is an article that explains more about the best types of apples to use in applesauce.

I made this Chunky Cinnamon Applesauce Recipe in my parents kitchen, so on a few things I had to improvise. Gloria's recipe calls for the apples to be peeled, quartered, and cored. Well, if they had an apple-corer, I couldn't find it (they were away for the day so I couldn't easily ask). So I simply peeled them and sliced them into chunks and got rid of the cores. Easy.

So this is how I cut them, just peeled and chunked them, they'll fall apart during cooking anyway, so no need to make it look pretty at this stage.

Gloria called for a pint of water (2 cups) which, to me, didn't seem like it'd be enough, but it turned out perfect for six apples. I'd be tempted to add a little more if I were doing 12 apples, I mean the apples will cook down and provide their own moisture. So, I don't know. I'll keep the recipe as a pint (2 cups) for the full 12 apples but if you feel like it needs more, add a little more.

The apples held firm as I occasionally stirred, it wasn't until about 10 minutes in that I could see them start to get mushy. And the last 10 minutes are the fun part because the apples really begin to fall apart and you get this nice chunky sauce. Wow. I just let it cool for about 10 minutes (it was still quite warm after 10 minutes), spooned it into a sealable container and stuck it in the fridge. It is really good!

This will for sure become a go-to recipe if I have excess apples anytime. Just so easy, so good and can use a lot. The six apples really made about six cups of applesauce, perhaps a little less, so just figure, if they are big apples, you'll get about ¾ cup per apple. Extra sauce may be canned or frozen. 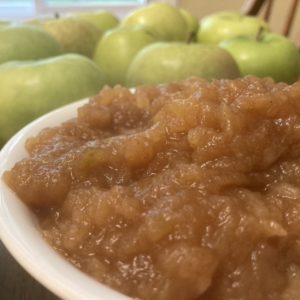