When I was 18 years old and the Amish Cook column was a concept taking shape in my young mind I set about to find a writer.  When I was in Michigan speaking to an Amish man (this was in 1991), he told of an Amish woman named Leah Schwartz who supported herself by writing cookbooks.  She had muscular dystrophy, so writing was one of the ways in which she could earn some income.  The Amish man suggested I seek her out in Berne, Indiana. So, I did.  I headed to the sprawling Amish settlement and knocked on the door of a farmhouse and nervously asked if they knew Leah Schwartz.  The Amish man scratched his long salt and pepper colored beard and said, “why, yes, I know Leah….she left the Amish and moved to Virginia.”    After that, I met Elizabeth Coblentz, who would go on to write the Amish Cook for over a decade and I rarely thought again of Leah Schwartz.  Until the other day….I had seen a cookbook on Amazon written by a Leah Schwartz, but that is a pretty common name. But when my book arrived and I read the intro here is what it said:

“I have muscular dystrophy and this is one of my means for an income for  myself. I live on a small farm with my parents close to the banks of the Wabash. I am of the Amish faith.”

It was the same Leah Schwartz who first drew me to the Berne, Indiana area even though she had already left.  The cookbook's arrival was a blast from my past and a closing of a circle in some ways.

The book is divided into 11 chapters from breads and rolls to candy and ice cream and anything in between (cassseroles, meats, and soups are bunched into one chapter).   I've not explored the book fully yet, but there are some true cultural gems in it.  One recipe that caught my eye is for homemade "rabbit ears."  I've never heard of it, but it seems very authentic to the Berne area, very much like a fried long john roll or other homemade doughnut.

I can find one used copy on sale at Amazon here.  That copy is from an early printing than the one I have.  Mine from the early 80s looks like it had been dressed up a bit with a fancier cover and says it is in its sixth printing. 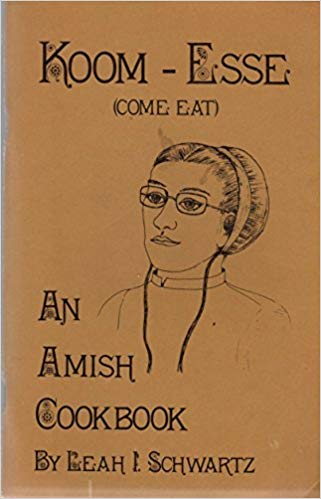 This cookbok is atypical of many Amish cookbooks with the illustration on the cover and the use of Swiss first for an English cookbook. Great marketing on her part.