My grandmother was steeped in the traditions of Italy. She never once stepped foot in the country, but her mother was born there and as a second-generation Italian American she often identified more as Italian than American.  I think about my Grandma Mary almost every day. She passed away several years ago, the day after Christmas at age 91.

My grandmother was steeped in the traditions of Italy. She never once stepped foot in the country, but her mother was born there and as a second-generation Italian American she often identified more as Italian than American.

There’s so much about her life that I didn’t understand or appreciate when she was alive, but now that I’m an adult with kids of my own, it all makes much more sense.  When I say "It" I'm just talking about the struggle that she must’ve felt to be a single parent for much of her adult life, pay the bills, and keep food on the table.

Italian and Amish cooking, by the way, are really are not far apart at all in their culinary roots. If you remove the spice factor from Italian cooking (Amish cooking is not typically very spicy), the two have a ton in common: homemade bread, homemade pasta, scratch-made sauces. Although, I will say about my grandmother, I’m not sure what happened, but she seemed to abandon a lot of the spices that you would find in typical Italian food. It’s like her Italian food became Americanized somewhere along the line. It’s not to say she wasn't a superb cook, she was, her food was just very simple. And, perhaps, in thinking out loud, it was just cheaper to eliminate some of the spices. (although super sensitive stomachs seemed to play a role in getting rid of spices too)

In looking at other Italian meatball recipes you’ll find flavors like parsley, garlic, Italian herb seasoning, red pepper flakes, basil, oregano, cloves, and on and on… None of those appear in my Grandma Mary's Easy Italian Meatballs. Meatballs are definitely an important part of Amish culinary culture. Spaghetti isn't, but homemade noodles are. So basically the same.

The lack of spice, doesn’t mean that her meatballs weren’t melt in your mouth terrific. They were. And in a way the absence of spices lets you focus just on the essence of the meatball and there is something to be said for that. She did always add a little garlic salt and some pepper, but that was about the extent of the spice.

My grandma was always very particular about the meat she bought, she'd study meat in the meat case like a forensic detective. My grandma may have not been able to control a lot of things that happened in her life, so she controlled what she could and using the best meat she could find was one thing she could do. Above are the onions being added to the ground chuck.

And my grandmother learned her meatball recipe from my great-grandma.  Great grandma‘s kitchen really did have a very Italian feel.  The whole house did. From the garden in the backyard, to the homemade wine, to the figs she would grow, and the accordion her husband would play. Even though her home was on this very suburban street in a Rust Belt Midwestern city, it was like a little slice of Italy and I really didn’t appreciate that enough.

It would be interesting if we were somehow able to follow her meatball recipe back to Calabria Italy where they came from, did they always leave out flavors? Or at some point did those flavors fall by the wayside. I’m guessing the latter.

These are Grandma Mary's Easy Italian Meatballs just before they go in the oven, the white-ish tint to them is the Parmesan cheese. Grandma always insisted that was the secret to great Italian meatballs.

All In The Sauce?

My grandmother's spaghetti sauce was also a big part of her meatball recipe.  She would make a sauce that probably mimicked the from-the-garden scratch-made sauces back in Italy, but her sauce was constructed from canned ingredients. Again, I think for her, it just came down to practicality. Unlike her mother's house, she didn’t have a garden at her small apartment so she had to do what she had to do. And she was always very particular about what brands she used, she used a combination of Hunt's canned tomatoes and Contadina tomato paste to make a spaghetti sauce. Again, very few spices.

Caption: the finished meatballs with sauce over them, I sprinkled some parsley flakes and Parm cheese on for color.

Here is a fun video of my late grandmother and my Uncle Pat (her brother) tasting three different kinds of meatballs.

Mix all of the above ingredients in a large mixing bowl.

Remove from the oven and simmer in your favorite sauce. 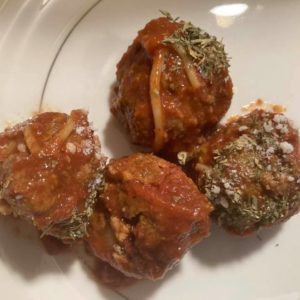