Hamburger Potato Chip Casserole is a delicious recipe very typical of the Berne, Indiana Amish community. Ah, see the photo below. That's an open-buggy traveling through the rural countryside of Adams County, Indiana. Man, that is some beautiful country, so pastoral and peaceful. I've spent many years there.

This is a casserole that comes to us from an Amish woman in Atlantic, Pennsylvania. She doesn't say why it is called "thank you" casserole, so we'll just have to assume that the casserole is so tasty that you'll say "thank you" a million times after you're served it. So, thank me for posting it:), and enjoy!

The Story of Soups

However, I will say that this recipe is common within the post-WWII tradition of Amish cooking, where processed, canned foods became popular among the Amish. So while, yes, the Amish historically were viewed as a farm-to-fork culinary culture, that changed greatly after WWII when convenience foods started gaining a foothold in some Amish settlements. There definitely is a lot of variation between Amish settlements. Those canned soups, for instance, didn't gain popularity in Lancaster County, PA in the same way they did in Adams County, Indiana. I just chalk up the differences as local custom and culture taking root.

My parents made the recipe the other night and they really enjoyed it.  Just one of these tasty, hearty calorie-packed suppers that Amish farmers and craftsmen need to fuel themselves through their days.

The recipe listed here is the "base model", but you can load it up with seasonal garden veggies: corn, diced fresh tomatoes, or sliced carrots.

So if you are looking for a good supper, check this out!

Many Amish grow their own potatoes, which definitely adds freshness to the casserole. But whether you use store-bought or homegrown, slice them raw into the casserole dish.

You can use hamburger, but if you have chunk beef or roast beef, you can use that too.

I know we have a lot of people on this site that don't like mushrooms, so, yeah, don't add them if you don't like them!

This is my kind of meal, a pile-on-your plate meal with cheese and chips on top. Wow. 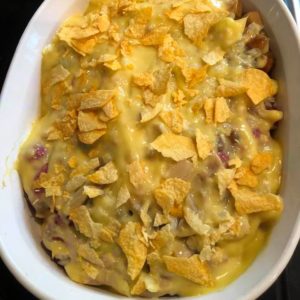 Feel free to add mushrooms to this casserole, if you like them.
Tried this recipe?Let us know how it was!
Shares
« Trending Recipes, 8-14-2021: Strawberry Moon Cake, Classic Milk Pie, and More!
The Amish Cook: Old-Fashioned Crunchy Onion Rings »